Shooting groups is all about determining a rifle’s accuracy, little to do with the shooter. That said, it’s essential to ensure your benchrest technique is sound. The platform (bench) must be rock-solid. There’s a reason why most ranges use massive, immobile cement benches. Good sandbags work well, but there’s no substitute for a solid, heavy adjustable rifle rest. Get the scope centered on target and make fine adjustments until it’s perfect. The idea is to settle into the rifle, gain your sight picture, and press the trigger without “muscling” the reticle onto the target. 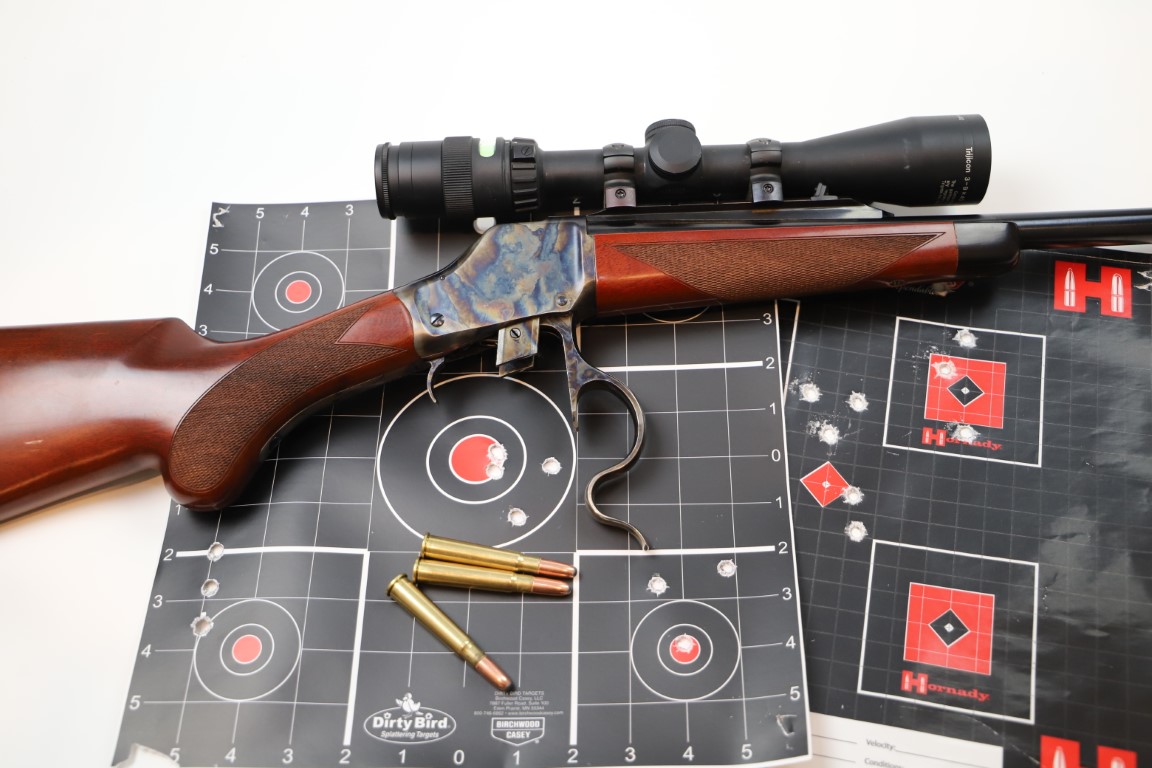 This falling block .303 was showing vertical stringing, right. Increased pressure on the fore-end screw and a business card shim at the fore-end tip immediately changed the groups from vertical to round. With the right load, accuracy should improve.

Before firing, dry fire a few times, checking the rifle’s position—and your trigger press and breathing. When the trigger breaks there should be no movement at all. If there is, start over and re-adjust the rifle. 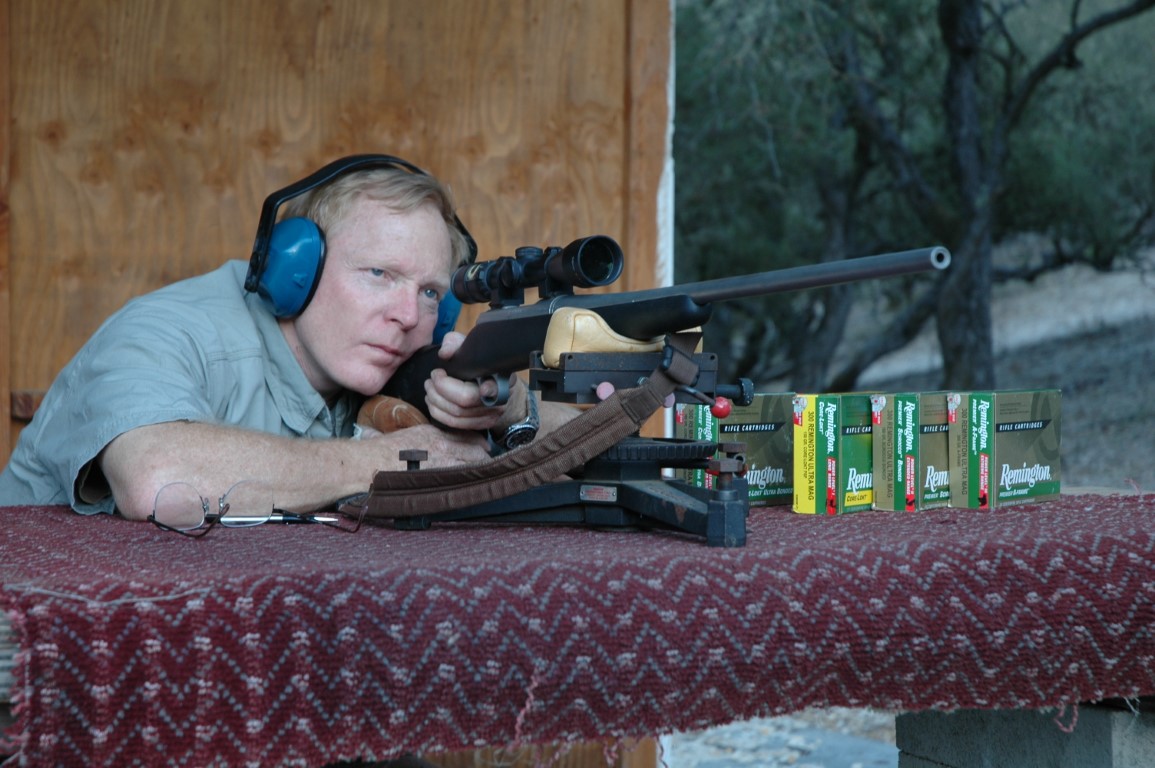 Raw accuracy is about the rifle, not the shooter, but first check your technique, and be certain you’re shooting from a rock-solid bench and a good shooting rest.

We’re going to assume you’ve checked all screws (action, scope mount, rings) and made sure all are tight. This is about determining your rifle’s accuracy. If you discover later that a screw was loose you’ve just wasted every shot. Who can afford that today? 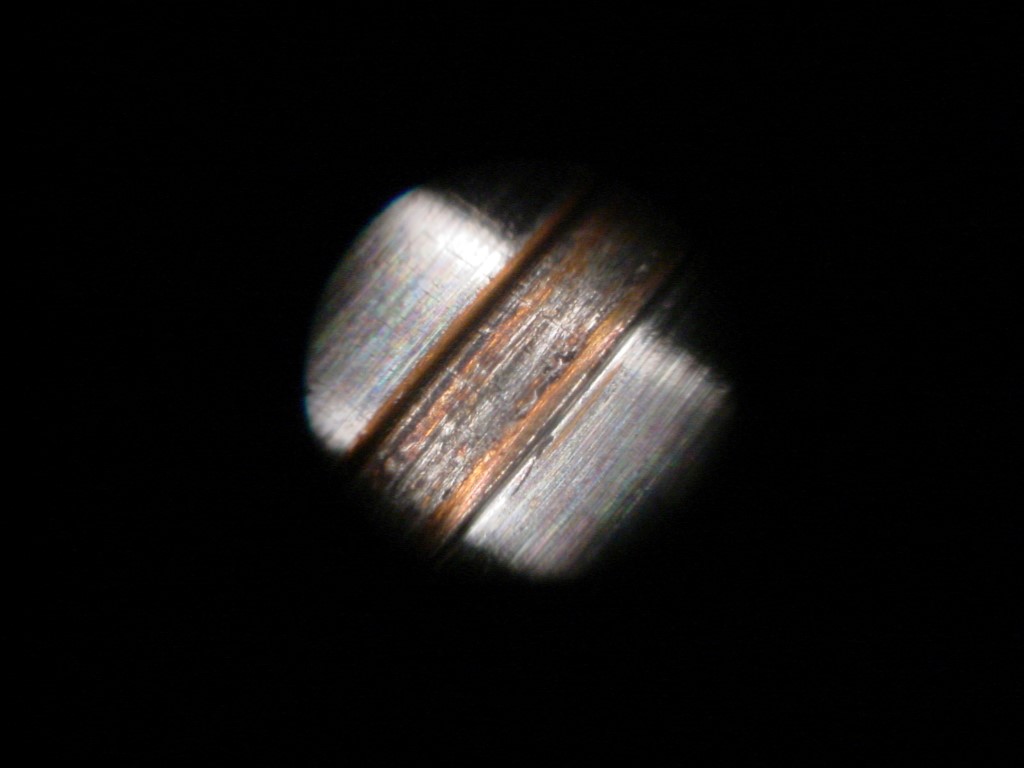 A micro-photo of the inside of a barrel. Even the best new barrels will show tool marks and rough spots. The passage of bullets—and frequent cleanings—will smooth a barrel, usually (but not always) improving accuracy after 50 to 100 rounds.

Everybody has a different cleaning protocol. I’m not OCD about it; I definitely don’t clean a barrel every time I put a bullet through it. However, when shooting for groups, I start with a clean, cold barrel, and I clean it on the range after four or five groups. After cleaning I fire a couple of fouling shots. Cleaning invariably leaves some solvent or lubricant in the barrel, so the first shots may have a different point of impact before bullets have “scrubbed” the barrel. The difference is rarely dramatic, but the fouling shots should not be counted as part of a group. With slender barrels, this may mean waiting for the barrel to cool before shooting a group “for score.” 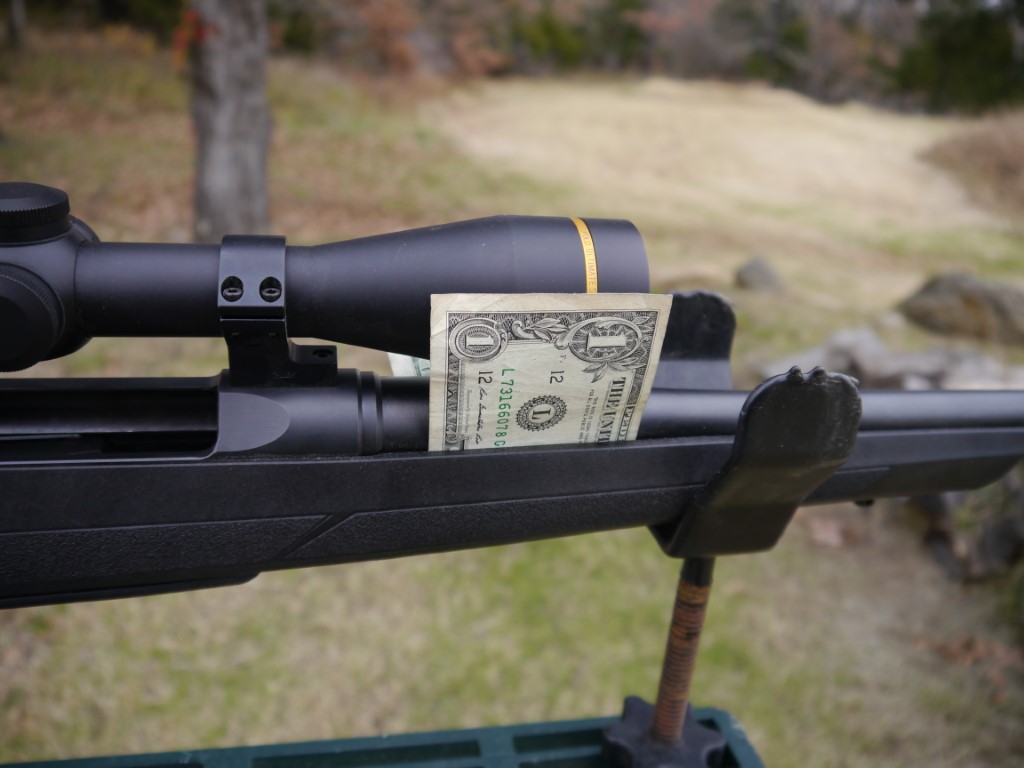 A free-floated barrel should allow free passage of fairly thick paper between barrel and channel.

Breaking in a new barrel is a different deal! Even the best new barrel has near-microscopic tool marks and rough spots. The passage of every bullet removes a bit of steel, polishing and smoothing the barrel (until, eventually, it’s “shot out”). Every experienced shooter has a personal protocol for a new barrel. Some fire one shot, clean…and then repeat ten times! Again, I’m not that guy, but I clean a new barrel much more frequently! Lapping a barrel is one way to short-cut the process, polishing the bore with a mild abrasive. One method I’ve tried (definitely saves ammo) is a hundred passes with JB Bore Cleaner, a mild abrasive paste. 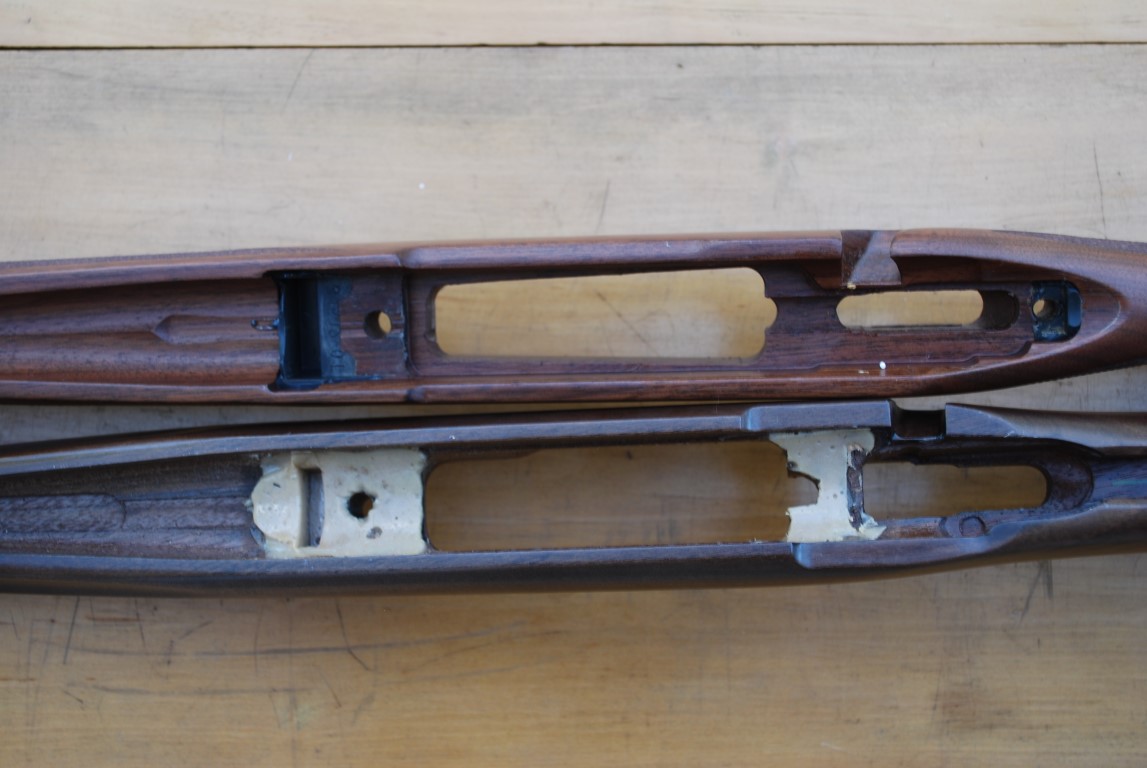 True “drop-in” stocks are uncommon. The action must be held firmly and consistently in the stock to preclude movement. Even major manufacturers often use bedding compound to ensure secure bedding, especially around the recoil lugs and action screws.

Not all barrels need break-in. Some shoot as well as they ever will right out of the box, but this is rare. There is no magic number, but in my experience, most barrels need 50 or 60 shots (at least half-dozen cleanings) before they settle down. Until then, whether you’re impressed or depressed by your groups, don’t worry about it too much. Experiment with different loads…and don’t start hacking on the bedding! My current mountain rifle is a .300 Winchester Magnum by Kenny Jarrett. It should shoot, and it does, but this barrel was slow to break in, lackluster groups with much load-to-load variance. It wasn’t like it suddenly woke up and started to shoot. Average groups gradually improved…incrementally. Today, with a few hundred rounds down the barrel, it shoots well with any good load, awesome with some, and most of its barrel life lies ahead. 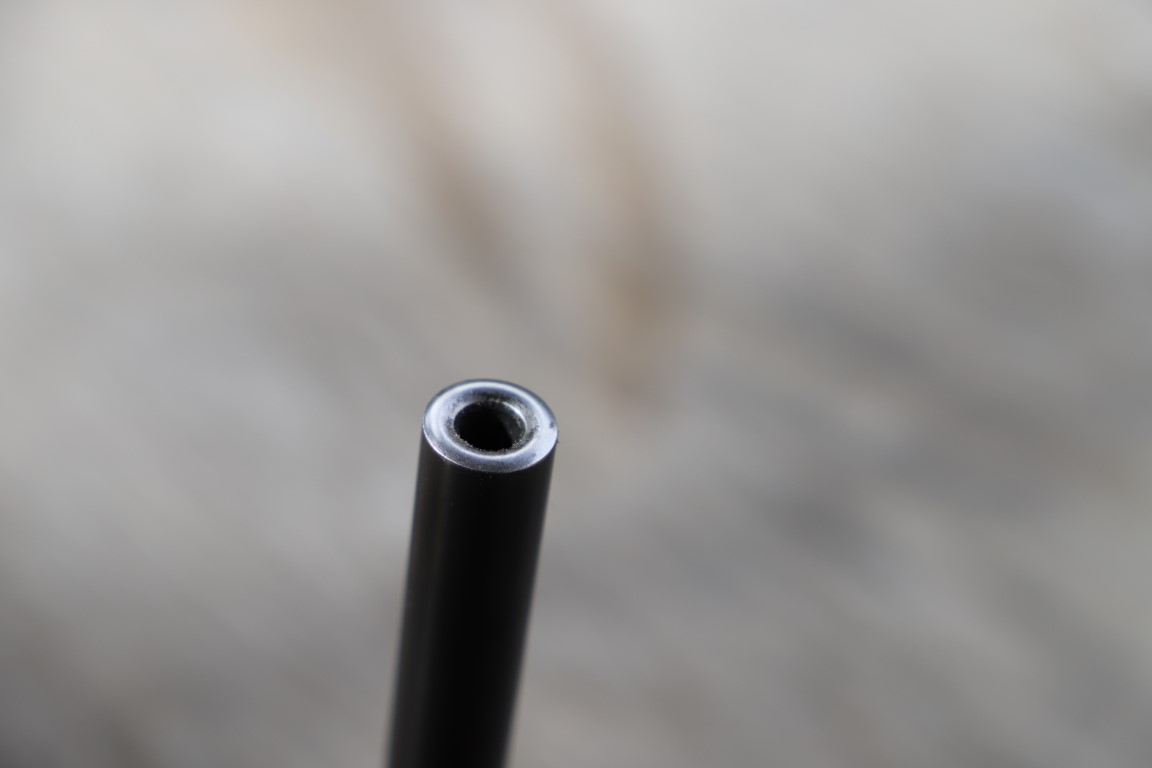 A rounded crown is most common on sporting rifles. The crown is surprisingly fragile and easily damaged; the greatest hazard is probably muzzle-down in a vehicle grinding against the grit and dirt on the floorboard.

The muzzle crown is the last thing the bullet touches as it leaves the barrel. It must be cut evenly and concentrically, 90 degrees to axis of bore. It’s not unusual to find an off-center crown and, even if the rifle left the factory perfect, the crown surprisingly fragile and easily damaged. Such as, by grinding muzzle-down amid the gravel and debris of a vehicle floorboard.

If a barrel just won’t shoot the way you think it should—or, if accuracy suddenly deteriorates—it’s amazing how often the culprit is a sloppy crown…even on new rifles. Any gunsmith can recut a crown, and tool sets are readily available; it’s a five-minute job. But, before you do that, it costs almost nothing (one cartridge) to check it out. 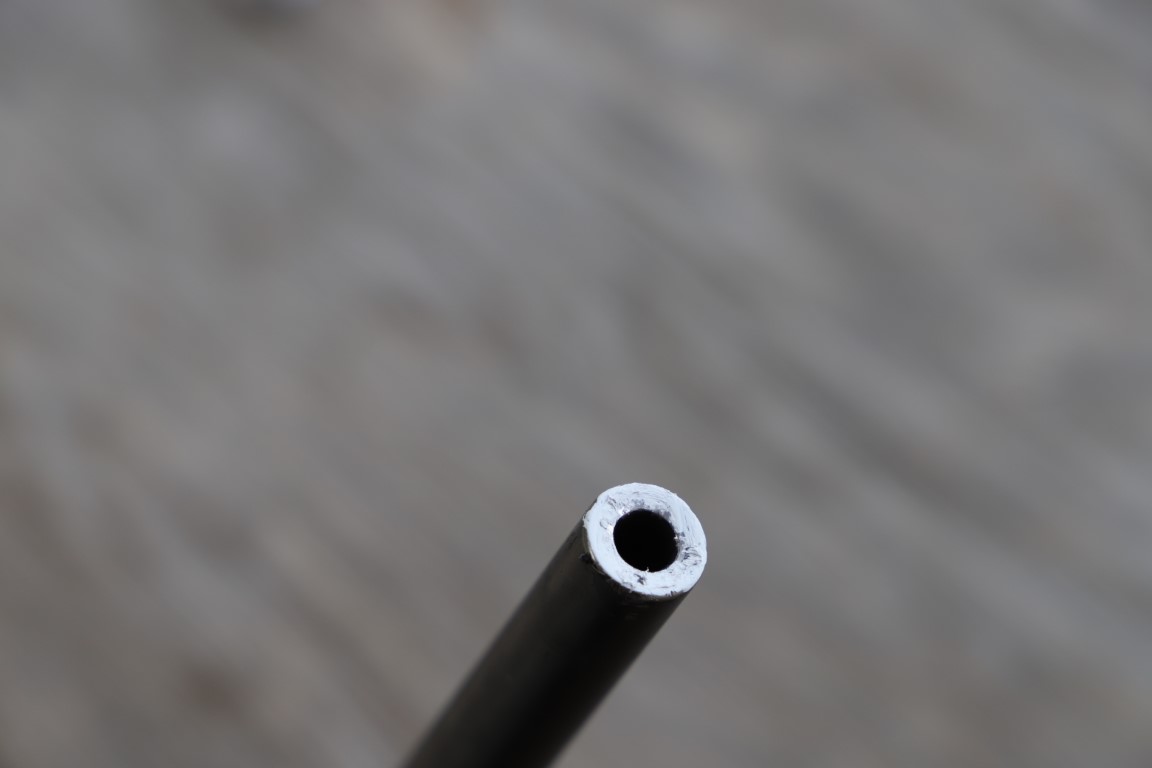 To check a muzzle crown, paint it with common typewriter whiteout and fire a shot. You will see blast marks where the rifling grooves meet the crown; they need to be consistent all the way around.

Carefully paint the muzzle, around the rifling, with typewriter “white-out.” Let it dry, and put one cartridge downrange. There will be black lines, “blast marks,” on the white where the rifling grooves meet the crown. In my experience, these blast marks are easier to see on recessed or “target” crowns, more difficult with rounded crowns; you may want to use a loupe to study the marks carefully.

If the marks are concentric and similar adjacent to the grooves, probably not the crown.  but if one or more marks is smaller or different, repaint the crown and fire another shot. If the same, I’d recut the crown before I tried anything else. It’s amazing how often this proves the problem, with a properly-square crown dramatically shrinking groups.

A free-floated barrel should allow free passage of fairly thick paper between barrel and channel.

Bedding is mating action to stock, and barrel to barrel channel. Tightly and uniformly fitting action to stock is essential to preclude movement. Barrel bedding is a matter of dampening, or making consistent, barrel vibrations while the bullet passes through the bore. The several methods all work…but none work all the time on all barrels. In full-contact bedding, whether with carefully sculpted wood or a bedding compound (like fiberglass), the barrel makes full contact throughout the channel.

Full-contact bedding is the most difficult bedding technique. Free-floating is the opposite, essentially no bedding at all: The barrel makes no contact forward of the action, and the barrel is free to vibrate as it will. This is easiest and cheapest bedding techniques. It works well on some barrels…but no technique works on all barrels. In between full-contact and free-floating are several options. Many makers bed the first few inches of barrel, at the shank, then free-float the rest. Pillar-bedding is a popular variation of this. 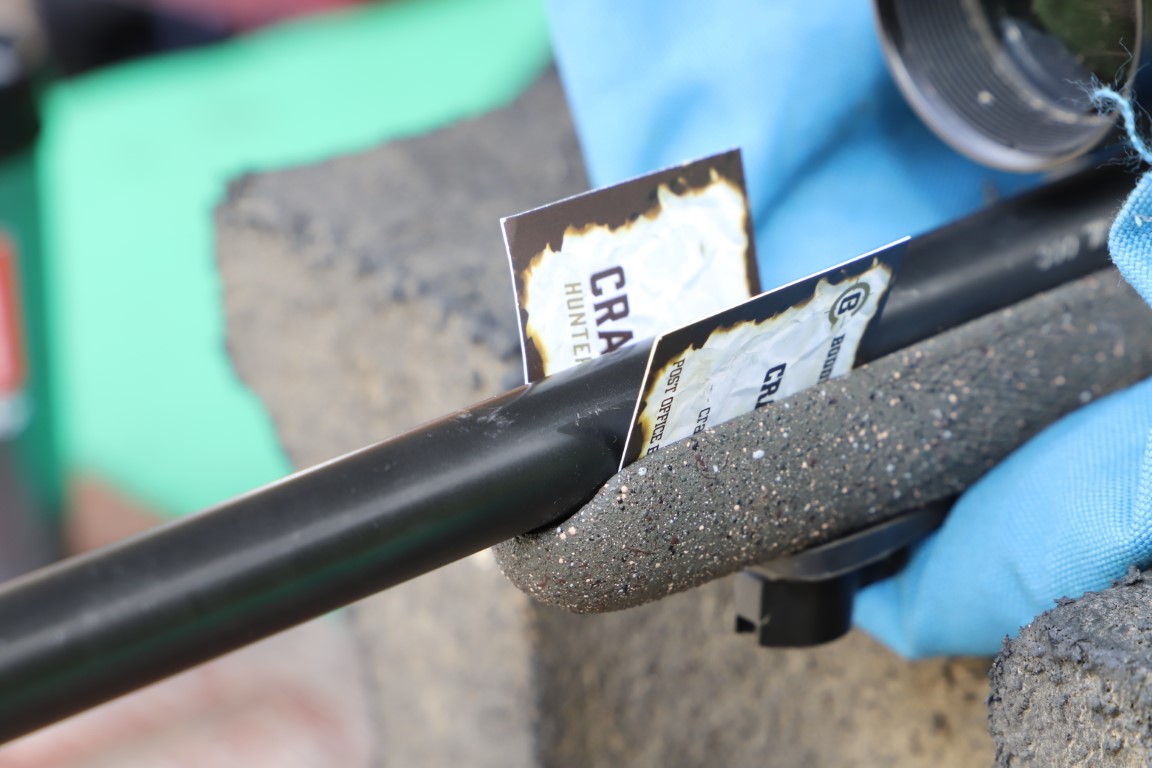 To try a business card shim, just loosen the action screws, insert a business card between barrel and fore-end tip and retighten the screws. The purpose is to place a couple pounds of upward pressure on the barrel, which often has the effect of dampening barrel vibrations and making accuracy more consistent.

Then there’s pressure-bedding, building up a pad near the fore-end tip (usually with bedding compound), so that, with the action screws tight, a couple pounds of upward pressure are exerted on the barrel. Inexplicably, but demonstrably, this serves to dampen or make barrel vibrations more consistent. It was a favorite technique with pre-’64 Model 70s which, though often surpassed today, were often exceptionally accurate for their time.

I’m not big on hacking on bedding; you can drive yourself nuts, usually to no avail. A given barrel is only going to group so well, no matter how much you want it to do better. However, there are a couple of things you can check. If a barrel is supposed to be free-floated (all or part), run a piece of paper between barrel and channel. High spots, especially along the sides, will bear on the barrel and ruin accuracy. This is not uncommon with sloppy factory stocks, and must be relieved.

To try a business card shim, just loosen the action screws, insert a business card between barrel and fore-end tip and retighten the screws. The purpose is to place a couple pounds of upward pressure on the barrel, which often has the effect of dampening barrel vibrations and making accuracy more consistent.

The best trick I know is to try a business-card shim to replicate pressure bedding. I learned this in the 1970s from a pre-’64 Model 70 collector, and I’m still amazed at how often it works. Loosen the action (or fore-end) screw(s) so you can insert a business card between fore-end tip and barrel. Depending on space, it may take more than one, but, with the card in place and screws tightened, you can feel you’re putting just a bit of upward pressure on the barrel. You can also adjust the placement of the shim, but just behind the fore-end tip is the place to start. 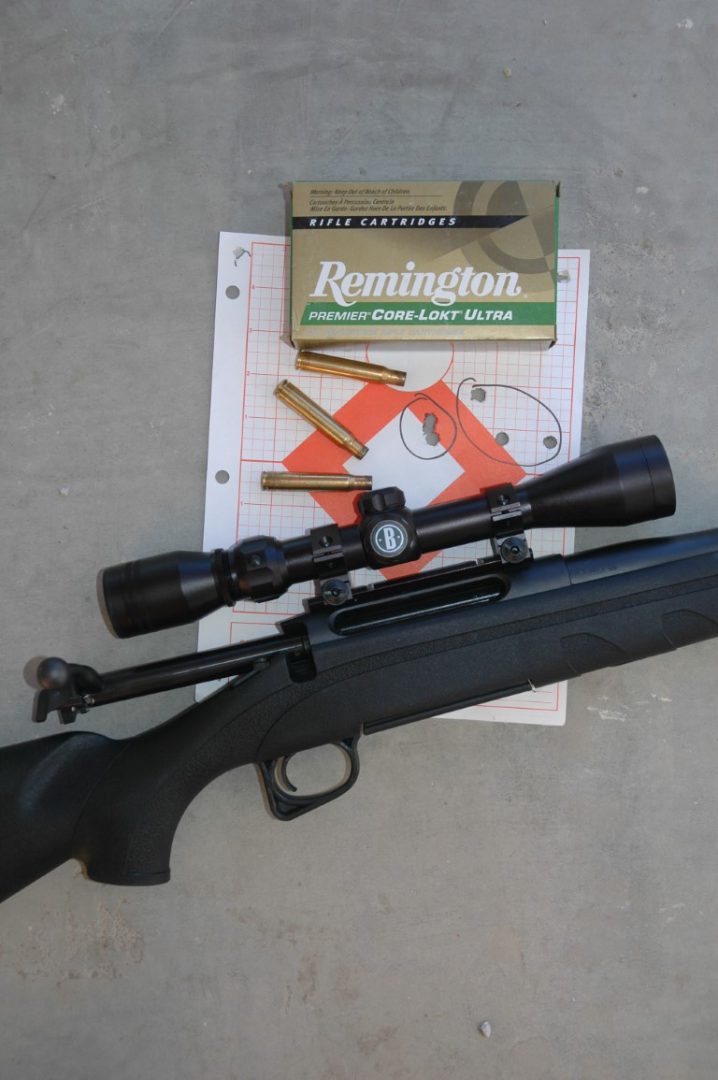 Before and after: Right, a group fired from a barrel with a sloppy crown. Left, a group fired immediately after recutting the crown. With accuracy, results this dramatic aren’t common, but sometimes you get lucky.

This trick is especially good to reduce vertical stringing. Just now, I’ve been messing with Uberti’s Courteney Stalking Rifle, 1885 High-Wall action, one of the two .303 British rifles I mentioned. Lovely rifle but, despite a stiff barrel, it showed vertical stringing. I adjusted pressure on the fore-end screw, which helped. Two thickness of business cards changed the groups from vertical to round. 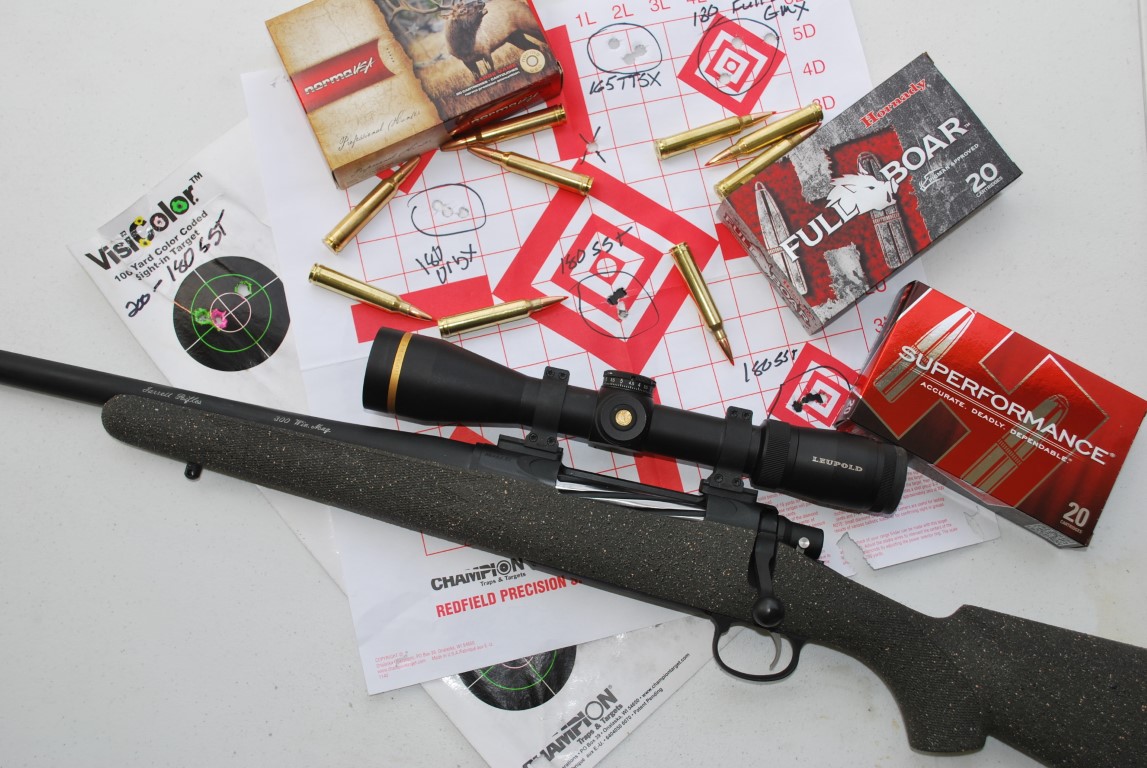 Boddington’s .300 Win Mag by Kenny Jarrett is especially accurate, but this particular barrel was slow to break in, really coming into its own after more than 100 rounds. Top left group is a final zero at 200 yards.

If this little trick doesn’t help, nothing lost. Remove the cards, tighten the screws. If it works, you can cut the cards to fit, then soak in oil to prevent rust from moisture absorption, or you can replace the cards with brass bar stock. I’ve done this once or twice, but I’ve got several rifles with permanent business card shims!

Couple years ago, I had a test rifle from a well-known maker that wouldn’t shoot like I thought it should. I shimmed the barrel with a business card and shrank the groups significantly. My mistake: I didn’t remove the shim before I returned the rifle. They discovered it and accused me of hacking on their bedding. That manufacturer hasn’t spoken to me since and probably won’t…but it still worked!