USE ENOUGH GUN…For All Game

USE ENOUGH GUN…For All Game

The phrase was made famous by author Robert Ruark (1915-1965). Actually, his memory, because Use Enough Gun is a posthumous collection. Naturally, we assume the admonition applies to large and dangerous game.

The phrase was made famous by author Robert Ruark (1915-1965). Actually, his memory, because Use Enough Gun is a posthumous collection. Naturally, we assume the admonition applies to large and dangerous game. So, let’s be clear: This story is not about animals that might gore, trample, bite, or eat you. 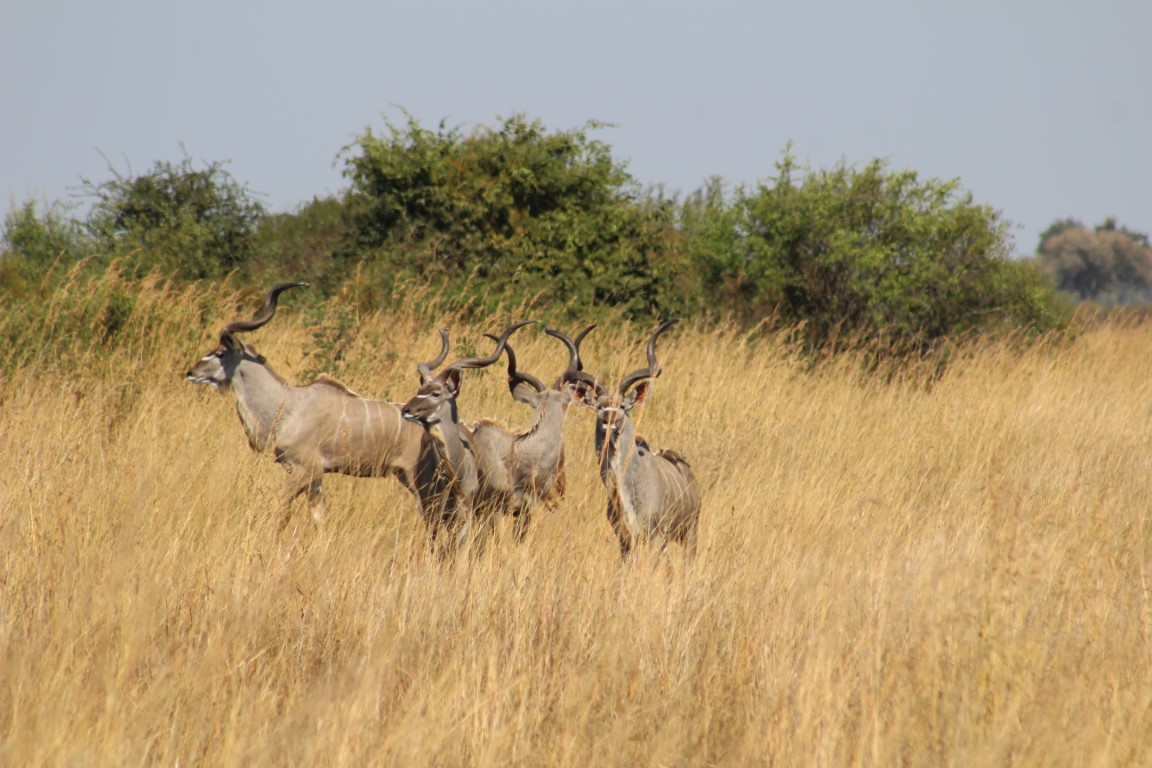 The greater kudu is a large African antelope, not as big as fully mature elk, but similar in size to a three-year-old five-point bull. Like elk, shots can come at any range. “Enough gun” at 200 yards is one thing, and quite another at twice that distance.

I’ve written those articles (and entire books), but that’s a simple subject. Most African jurisdictions have game laws that tell us what constitutes “enough gun.” In some countries, these are broad, such as “minimum .375 for all dangerous game.” Other areas have more specific rules, sometimes including minimum energy standards. Rather than guidelines, these are enforceable statutes. We can disagree and exceed the standards, but if our chosen rifles and cartridges don’t meet the minimums, we’re breaking the law.

Most US states that allow rifle hunting have a minimum legal caliber. Today, thanks to the widespread popularity of the AR platform, most jurisdictions now allow .223s, at least for deer. Some elk states maintain a higher standard but in most areas, we can now legally hunt deer and wild hogs with .22 centerfires. 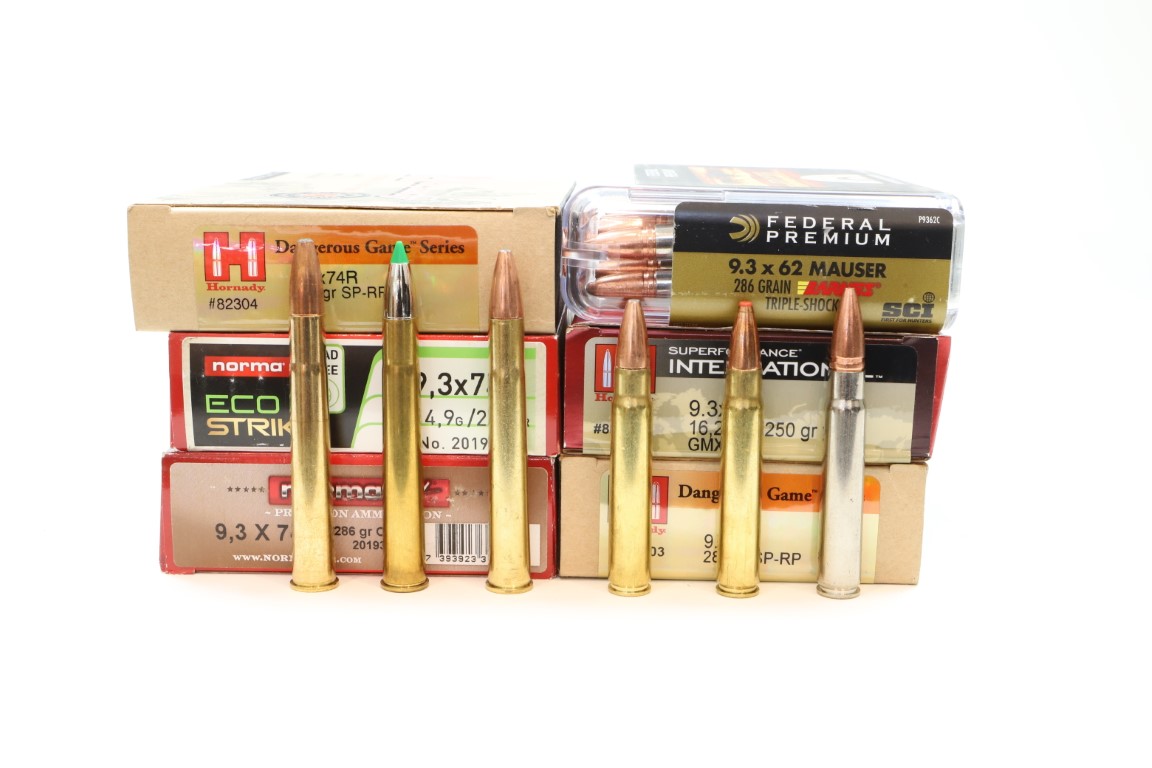 “Enough gun” for dangerous game is subject to much debate but is simplified by minimum standards in most African jurisdictions. Widespread belief is the .375 H&H is the usual legal minimum, but it’s more commonly the European equivalent 9.3mm (.366-inch), with either the 9.3x74R or 9.3×62 Mauser usually legal.

On mature bucks and big boars, I’m not convinced this is a great idea, but many of us do it (me included). Light recoil and accuracy make shot placement easy. For brain and neck-shot specialists, the .223 is plenty of gun, and it doesn’t much matter what bullet is chosen. Folks like me, who prefer body shots, are better served by tough, heavy-for-caliber bullets designed for larger game.

Still may not be the best choice. Entrance holes are tiny and exits are unlikely. On larger deer, definitely on hogs, my experience is recovering game shot with .22 centerfires requires more tracking…and there isn’t much trail to follow. 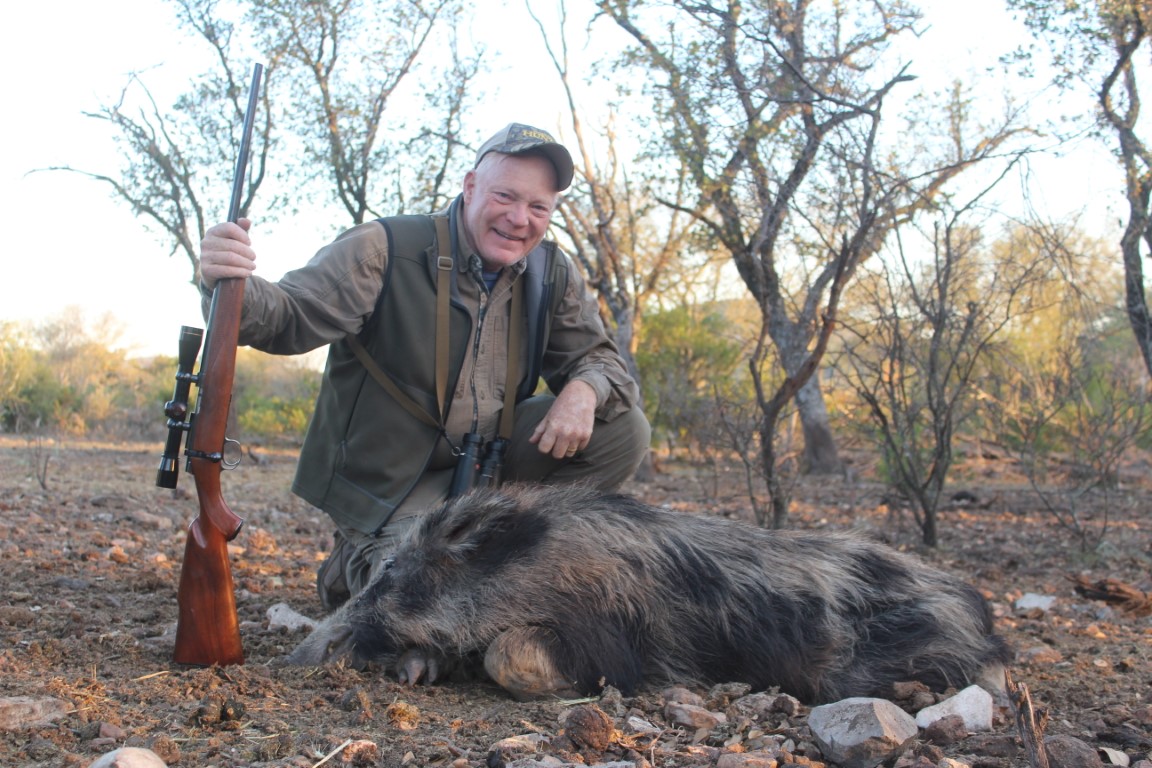 This Texas hog was taken with a brain shot from a little .22 Hornet. Definitely not enough gun, but careful close-range hunters who specialize in brain shots can be a bit more flexible in cartridge choices.

Whether you’re one of the guys who “only does brain shots,” or, like most of us, you usually take the biggest, surest chest shot, when hunting big game with .22 centerfires the bottom line is the same. You must get close. In the first instance, because the head shot is a tricky target; 100 yards is a long brain shot. In body shots with .22 centerfires, you don’t have much bullet energy anyway, and you need all you have. Faster cartridges like the .22-250 offer more range, but when I hunt deer with a .223 I figure about the same 100-yard maximum.

Now, it’s impossible to quantify exactly how much gun is “enough.” No two shots are exactly alike, with nuances of angles, distances, shot placement, and bullet performance. There are no absolutes. Ideal shot placement—with a bit of luck—may mask inadequacy…until it doesn’t. And the reverse: Make a bad shot, and one’s natural impulse is to blame the cartridge or bullet. There’s no precise formula, but our vast array of cartridges offers plenty of good choices. 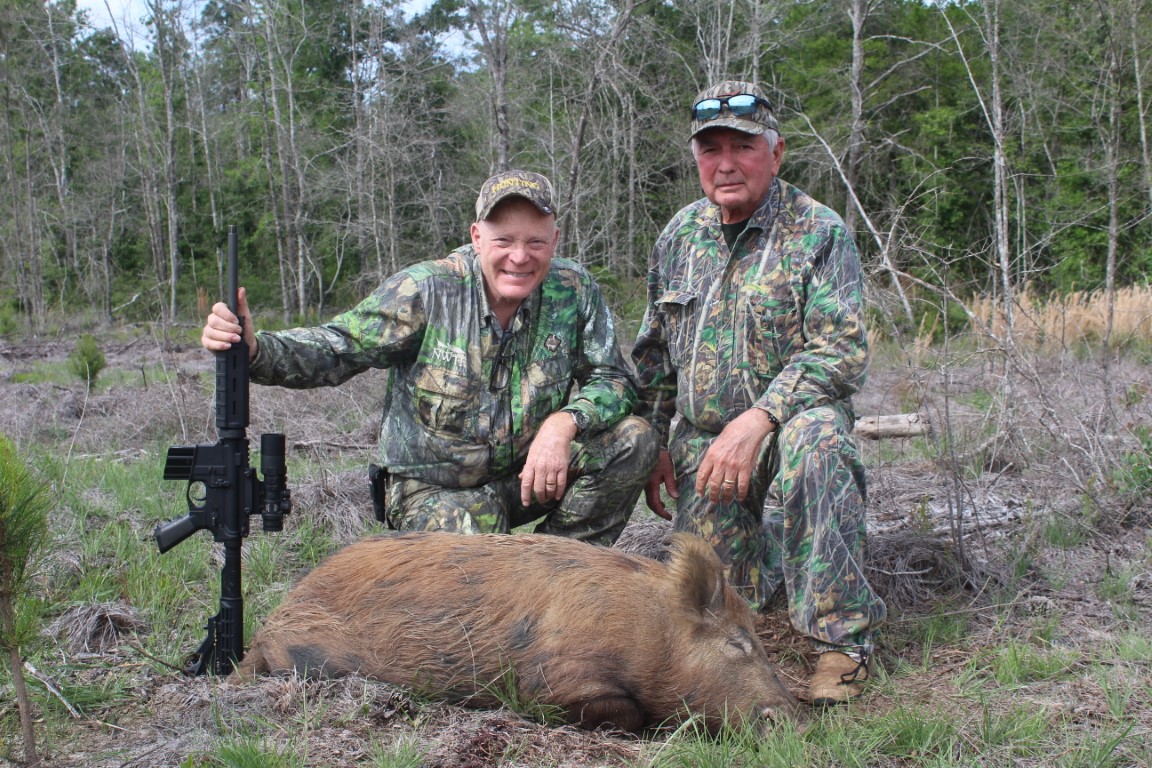 Boddington and Zack Aultman with a Georgia hog, rolled with a body shot from a .22 centerfire AR. Although many use .223s for hogs, this is a bit of a false reading: .22 centerfires aren’t enough gun for body shots on big hogs…and this isn’t a very big hog!

Recognizing “enough gun” for dangerous game may be the easiest of all. Nobody takes long shots at big bears or buffaloes, so there’s little concern about trajectory or residual energy. What you start with better be enough. Everything else is more difficult, especially with today’s fascination with shooting at longer ranges. We really need to think about two criteria: Enough velocity, energy, and bullet weight for the close shot we might get; and enough for the long shot we might want to take. These are not exactly the same. 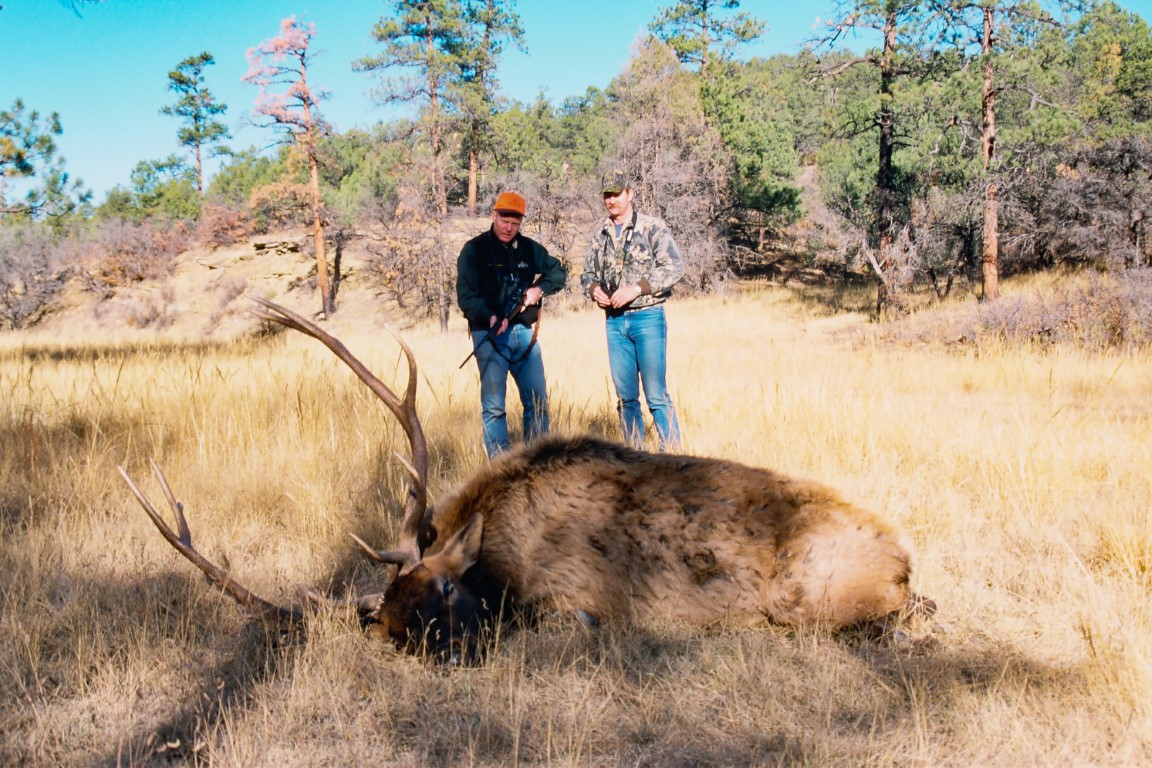 In North America, elk is a major animal that sparks the “enough gun” debate. Boddington used a .270 to take this New Mexico bull, very cleanly with one shot. The .270 is the lightest cartridge he has used for elk, but believes the faster 6.5mms are enough gun…but not at longer ranges.

I like the 6.5 Creedmoor, but I don’t credit it with magical powers. Its 140-grain bullet is not heavy, and its 2700 fps velocity is not fast. Past 300 yards it starts to drop quickly…as does residual energy. A young writer friend who did credit the Creedmoor with magical properties was convinced it’s a 400-yard elk cartridge. At that distance, his elk was wounded and lost. Sometimes we get away with folly, sometimes we don’t, but the Creedmoor is well below the line for elk-sized game at longer ranges. 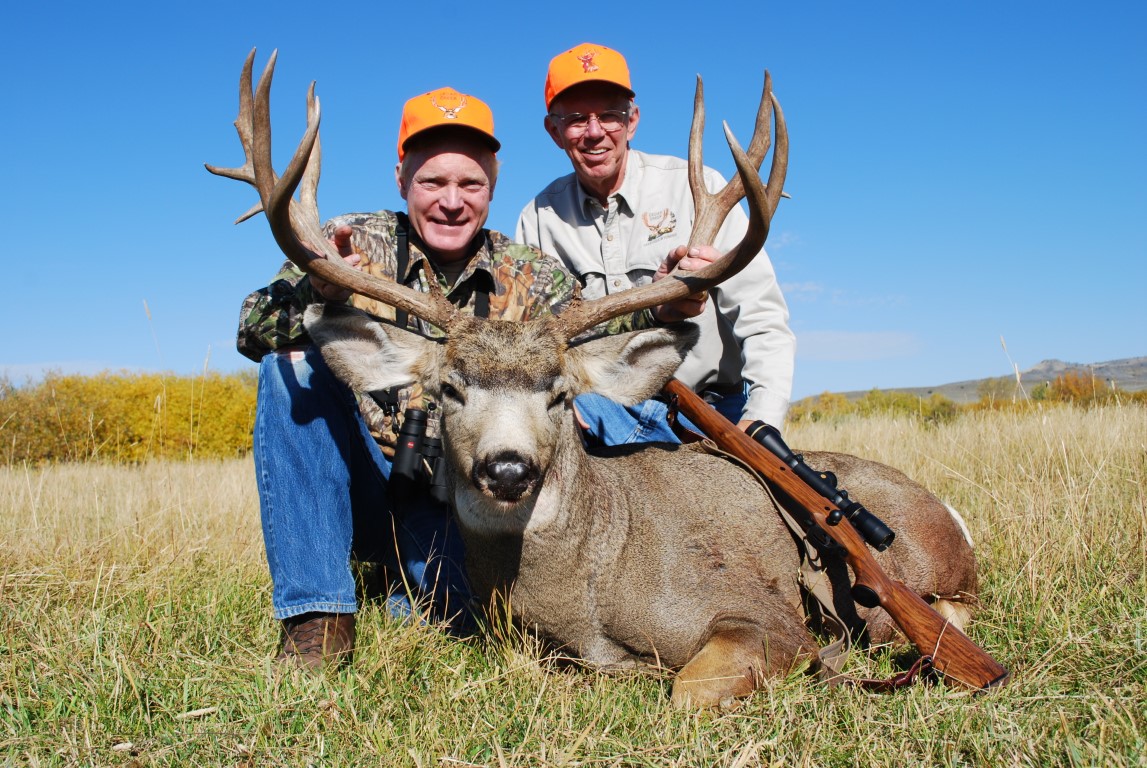 Boddington used his .264 Winchester Magnum to take this excellent Wyoming mule deer. Ballistically identical to the 6.5 PRC, faster 6.5mms are ideal for deer-sized game at any sensible range, but perhaps a sound minimum for elk-sized game, and not at extreme range.

Ringing steel with the Creedmoor at 1000 yards is easy and fun, but that isn’t the same as shooting at game. The steel target doesn’t care how hard or soft the strike; it’s going to ring. My longest shot on game with a Creedmoor was a whitetail at 325 yards. On deer-sized game, the Creedmoor has power and performance beyond that, but you must do things right. We mis-ranged the buck, adjusting for 300 yards vice 325. Doesn’t sound like much, but I needed two more clicks up and hit the buck low. The rangefinder probably caught an unseen branch, not uncommon. I corrected, held higher and hit him again. A flatter-shooting cartridge would have eliminated an almost-miss. 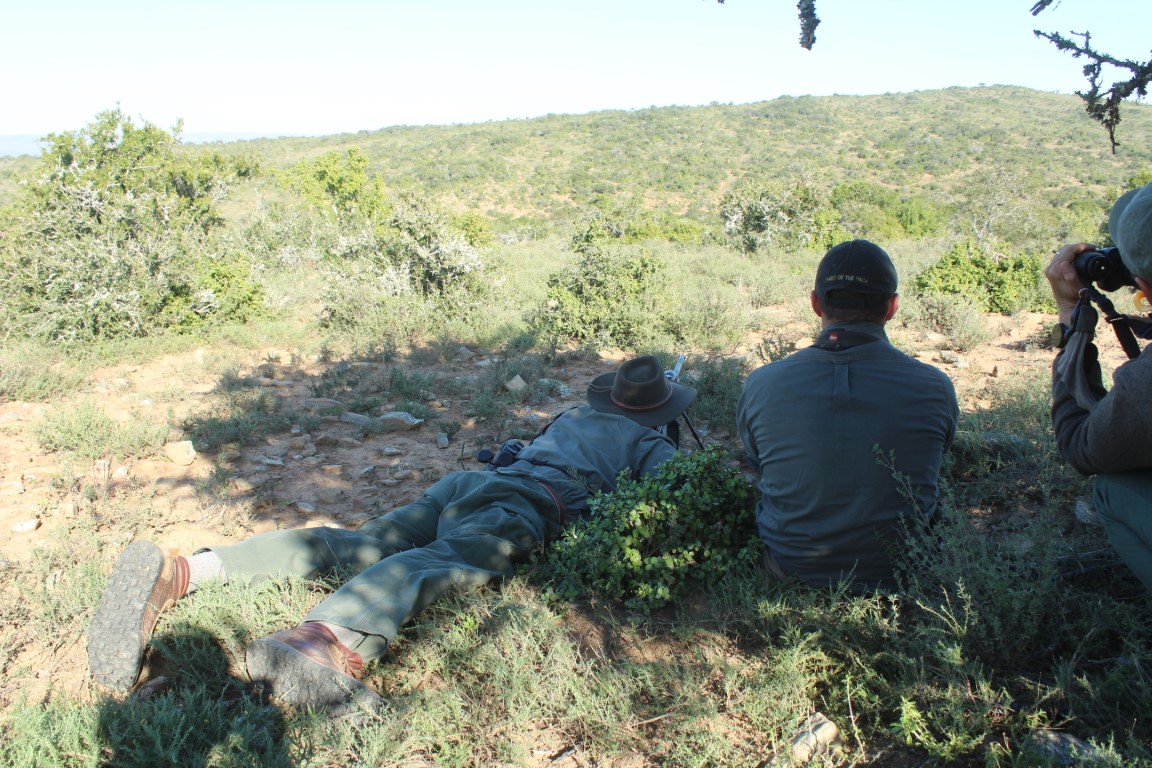 With perfectly steady position, John Stucker is about to shoot a zebra at 400 yards with his Christensen 6.5 PRC with 143-grain ELD-X.

I like the awesome downrange performance of the 6.5mm’s long, aerodynamic bullets, so I’m becoming a fan of the 6.5 PRC. With 140-grain bullet at 3000 fps, it is 300 fps faster than the Creedmoor, delivering more energy and shooting much flatter. There’s no magic in this formula; the old .264 Winchester Magnum does the same, as do the 6.5/.284 Norma and the new 6.5 Weatherby RPM. I have a good .264, but the 6.5 PRC, with modern case design, is better-suited for today’s longer, heavier “low drag” bullets. Although I’m new to the 6.5 PRC, I’ve taken a lot of game with the .264: Deer, sheep, goats, African plains game. I thought I had a pretty good idea of the size of game this level of 6.5mm was “enough gun” to handle. For sure, I considered it elk-adequate to considerable distance, if not extreme range. 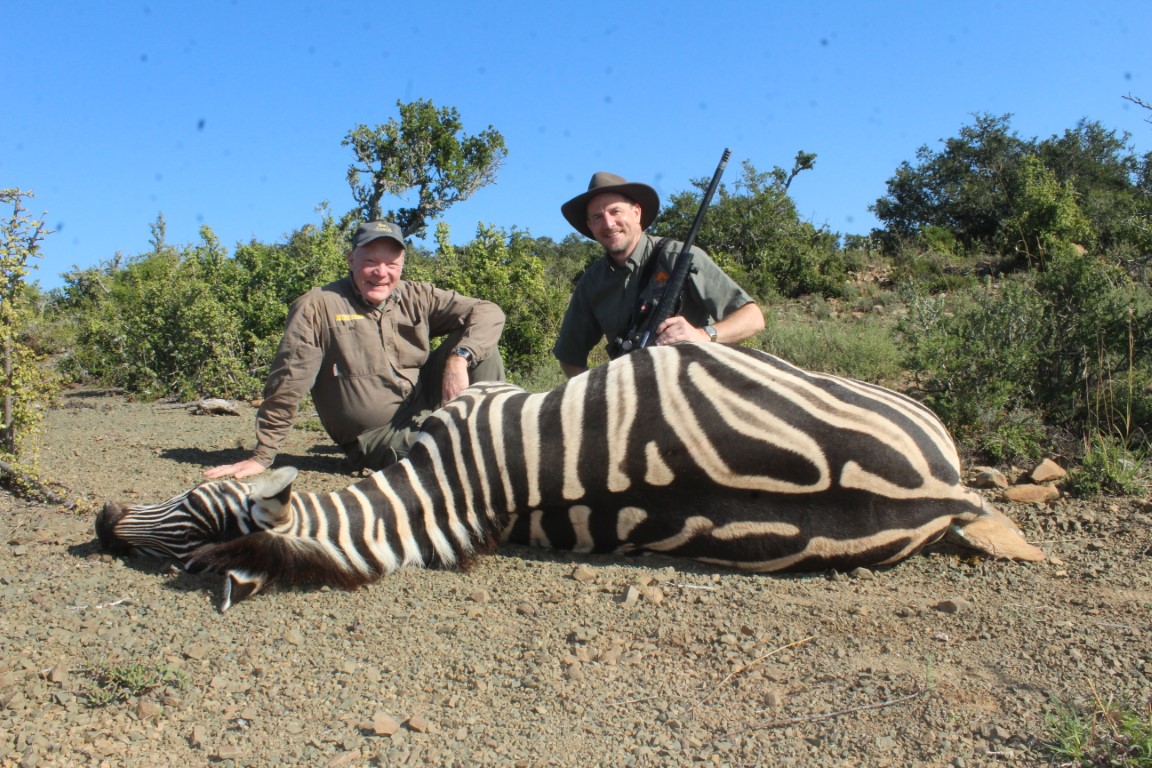 Boddington and John Stucker with Stucker’s Burchell’s zebra, taken at 400 yards with a 6.5 PRC. Maybe it would have worked perfectly if the first shot had been two inches left…and maybe not. Collective summation: Not quite enough gun for large, tough animals at that distance.

My buddy John Stucker has a Christensen Ridgeline in .300 Winchester Magnum, accurate, powerful, a wonderfully versatile rifle. Last year in Georgia, John used a borrowed 6.5 PRC and flattened a big-bodied buck in its tracks. He liked the cartridge so much that he bought another near-identical Christensen in 6.5 PRC.

This year we had a South African plains game hunt planned with Carl van Zyl’s John X Safaris. Stucker had an obvious choice in his Christensen .300. However, he was focused on smaller antelopes often taken at longer ranges: Vaal rhebok, klipspringer, steenbok, mountain reedbuck, nothing “big” on his wish list. He decided to take his 6.5 PRC and, for sure, I agreed 100 percent. 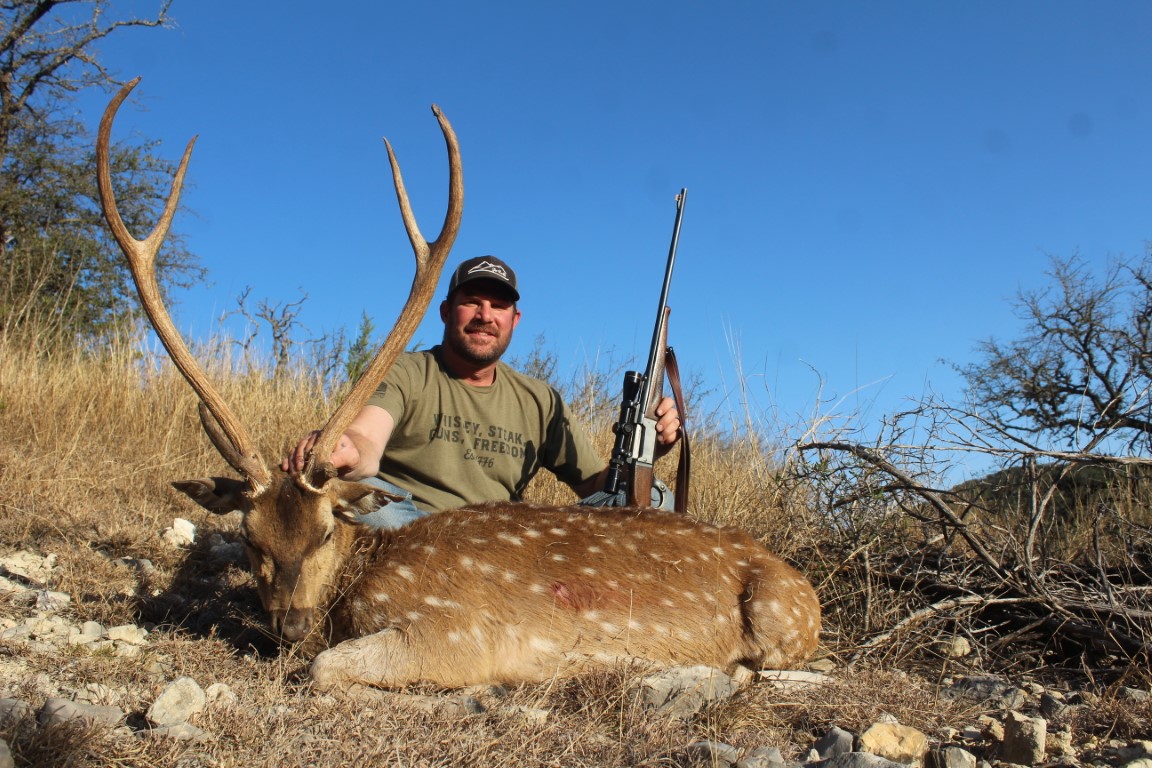 Boddington’s son-in-law, Brad Jannenga with a nice axis deer (similar in size to mule deer), taken with an old .300 Savage lever-action. For deer-sized game there are dozens of adequate cartridges. On larger game, more thought should be given to cartridge adequacy.

Africa’s pygmy antelopes often mean difficult shooting. Obviously, the 6.5 PRC was plenty of gun, and Stucker was on a roll. With great shooting and good luck, he was done early, so he added zebra and maybe a kudu to his list. An average kudu bull is much the same size as maybe a youngish five-point or raghorn elk. At possibly 800 pounds, a zebra is as big, and as tough, as a big bull elk. John’s .300 would have been perfect, but we had no reason to question his 6.5. His PH, “Stix” Hoole, an astute “gun guy,” was also in agreement. Should be fine. 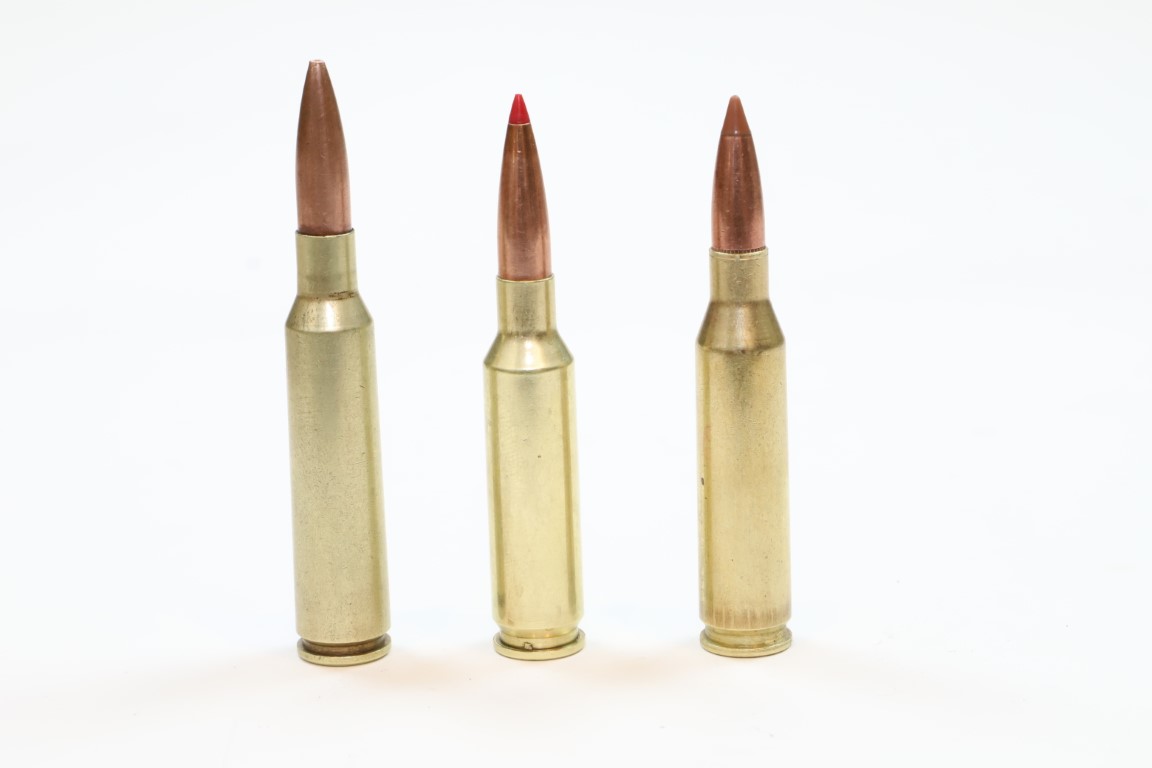 Left to right: 6.5×55 Mauser, 6.5 Creedmoor, .260 Remington. These 6.5mms are almost identical in ballistics: 140-grain bullet at about 2700 fps. They are awesome for deer-sized game, but adequate for elk only at closer ranges…with excellent shot placement.

Here’s where nuances of shot placement, distance, and luck come into play. John got a shot at an older, big-bodied kudu bull with terrible horns, a “management” bull. One 143-grain ELD-X crumpled the bull, perfect shoulder shot at 380 yards. We were all stoked and gratified; the 6.5 PRC was obviously plenty of gun.

Unfortunately, the zebra told a different story. John’s first shot was just over 400 yards. The way folks tell it these days, that’s not far, right? From a steady position with data well dialed-in, very do-able. However, from muzzle energy of 2782 ft-lbs, residual energy at 400 yards was 1800. Again, nuances. Maybe the animal was quartering a few degrees, or maybe the first shot was a couple inches too far forward. Whatever. The first shot on the shoulder didn’t do the job. Nor did additional shots, apparently perfectly placed despite increasing distance. The animal went down, but when we approached it jumped up and needed a close-range finishing shot. 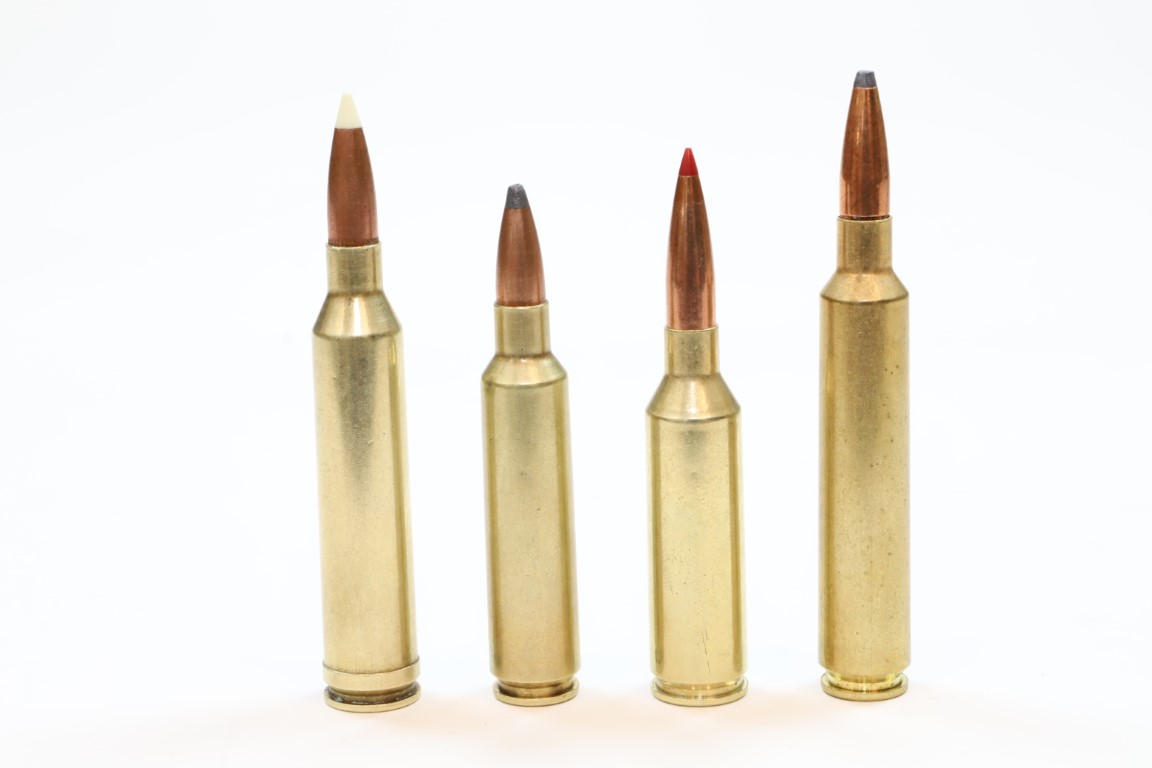 I can’t tell you how many more feet per second in velocity, how many more foot-pounds of energy, or how many more grains of bullet weight we should have had for that zebra. Nor, precisely, can anyone else. I don’t even know for absolute certainty that we didn’t have enough. Maybe if the first shot had been two inches farther left we’d still be congratulating each other on a great shot, made with a perfect choice of cartridge and bullet. But I don’t think so, because the lesson isn’t new. The last time I used my .264 in Africa (140-grain bullet at 3000 fps, so ballistically the same as Stucker’s 6.5 PRC), I remember thinking that larger, tougher antelopes—and zebra—traveled a bit farther with well-placed hits than would have been the case with 7mm or .30-calibers with heavier bullets. The problem with using “enough gun” is that nobody can say exactly what that is for various sizes and types of game. It only becomes obvious when you don’t have quite enough!