If you’re of the right-handed majority, they probably don’t matter much to you at all, but I want you bear with me and give this some thought.

One of my all-time favorite “crazy” letters went something like this: “Boddington, I’m sick of hearing you whine about scarcity of left-handed firearms. You should blame your mother; she should have made you right-handed like normal people…I can assure you, if you were born in Germany in the 1930s you’d be shooting right-handed.” 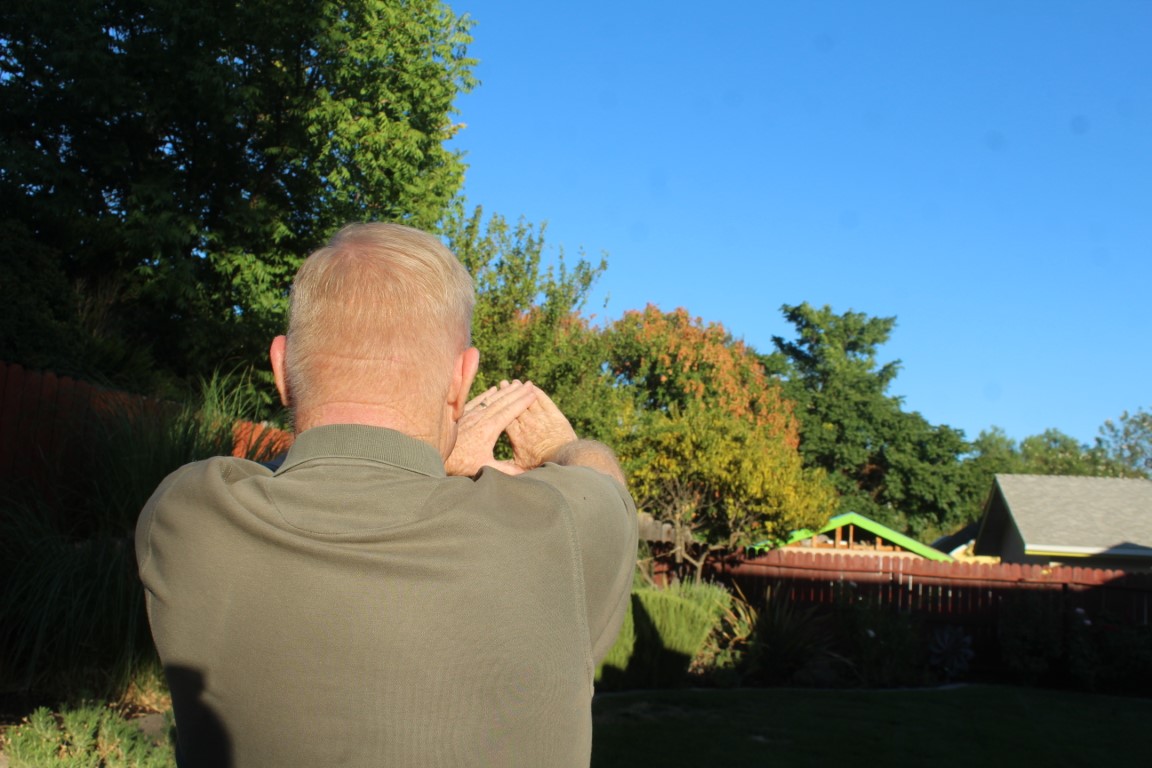 Any question about which eye is dominant? Perform this simple test, sighting on a small object and closing one eye, then the other. At 65, left-handed and long left-eye dominant Boddington was shocked to learn that his eye dominance had shifted to the right eye!

Nobody knows the exact percentage of left-handed people, but we’re a small minority, estimated between 10 and maximum 15 percent. Not all manufacturers offer left-handed models. Most that do offer limited variations and chamberings but, compared to when I was young, today there’s a pretty good selection. Honest, if were a firearms manufacturer, I’m not certain I’d tool up for the left-handed market. Partly because it’s small, and also because many lefties don’t buy left-handed guns. They make do with right-handed guns…like always.

For centuries, lefties were forced to be right-handed, too awkward for tactics with swords and shields. I’m not sure when our military allowed left-handed shooters, but I trained as a lefty 50 years ago. Whether you consider preference for the southpaw side natural or an abomination, there are other considerations. 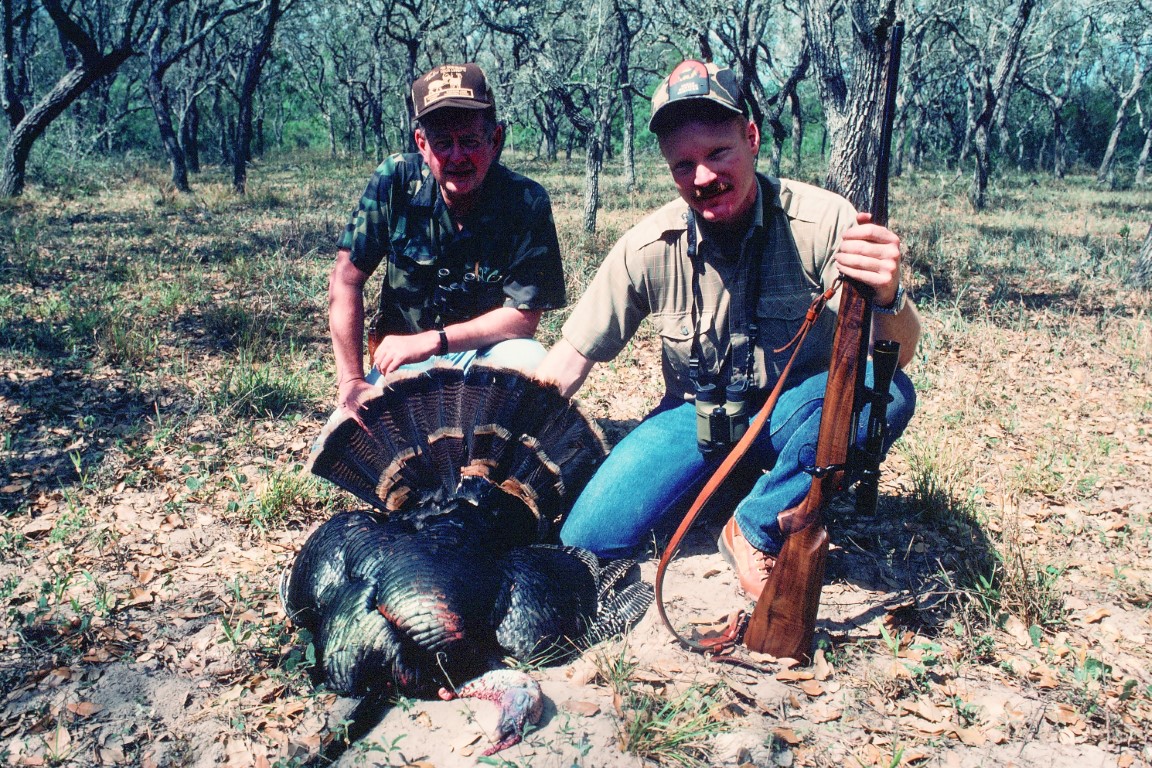 Veteran gunwriter John Wootters and Boddington with a nice Rio Grande turkey gobbler. Lifelong right-hander Wootters lost his right eye to a detached retina. He successfully made the shift to left-handed shooting but, in his 60s then, it wasn’t easy.

In addition to physically favoring one side, most humans have a stronger or dominant eye. Unlike many activities that rely heavily on our binocular vision, shooting (especially with sights), requires aiming with just one eye. For most people, it’s easier to learn to shoot with the dominant eye.  Eye dominance often follows hand preference…but not always. As toddlers, we announce “handedness” by reaching for toys and spoons with one hand or the other. This may be established before eye dominance is determined. 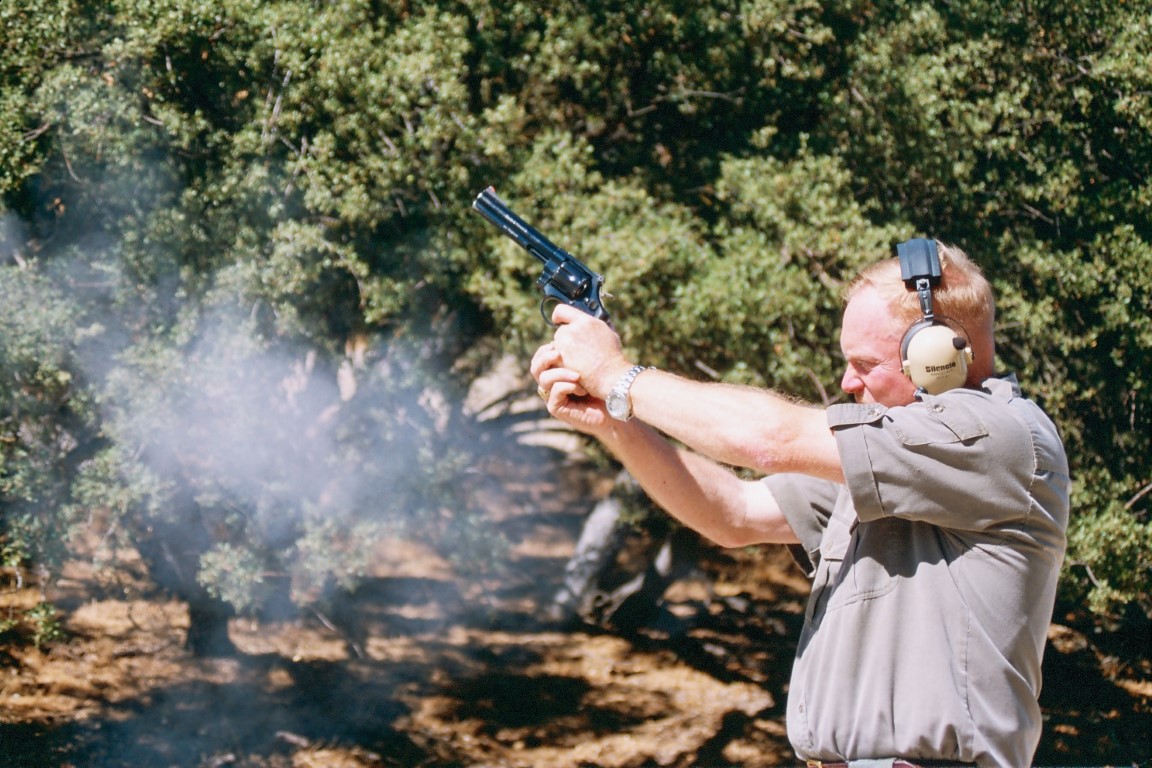 Handgunning is different. Almost all semiautos eject to the right, not a problem at arms’ length, and revolvers are ambidextrous. That arms’ length distance also offers multiple options for solving cross-eye dominance.

Cross-eye dominance (right-handed, but with left eye dominant; or vice-versa) is not uncommon. Interestingly, cross-eye dominance is more common among women than men, with some studies showing a significant percentage of cross-eye dominance in females. Not a problem in many sports, but a big deal in archery and shooting. Especially today, with women forming the fastest-growing segments in almost all shooting sports.

So, you are right-handed and right-eye dominant. You don’t care. Fine, but as the kids and ladies in your life learn to shoot, are you sure they’re starting out on the proper side? There are simple remedies to improve shooting with cross-eye dominance but, from learning to shoot is faster with the dominant eye. The shooting shoulder and trigger hand should be on that side.

Easiest thing in the world. In a large room, pick out a small object like a light switch. Stand with arms outstretched, palms away. Bring your hands together, overlapping fingers and thumbs so that you create a small hole between the webs of your thumbs. Focus on the object through the hole and close one eye. If the object remains stationary, your open eye is dominant. Without moving your head, close both eyes and open the other eye. The object should jump, either out of view behind your hand or to the side. That is not your dominant eye! 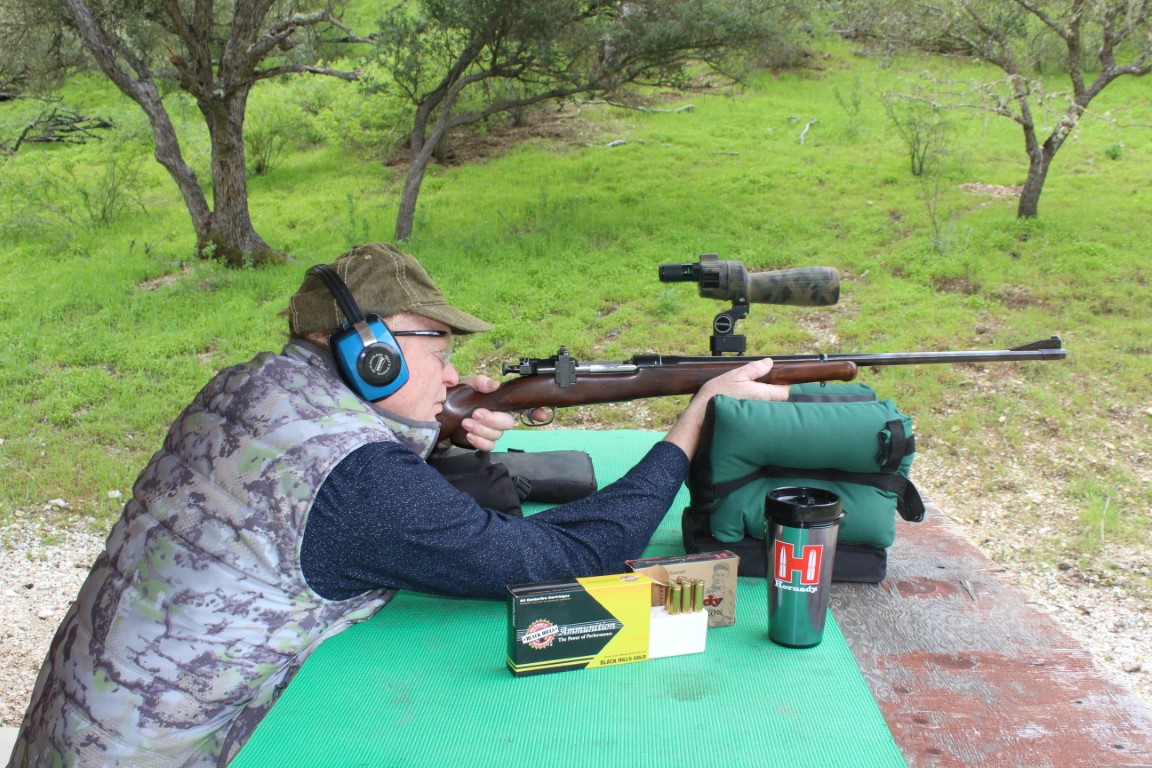 Springfield LH conversion: Before LH actions were common, bolt-actions were often converted, switching the bolt handle and reversing bolt rotation. This is a converted Springfield by R.F. Sedgely, fast to operate, but the shooter’s face remains in peril if there’s a catastrophic failure. Mirror-image actions that eject to the left are much safer!

Stuff happens. I’ve been left-handed and left-eye dominant most of my life, but our eyes change as we age. About five years ago, I started having trouble resolving iron sights and shotgun ribs. Worse than that: I was clearly seeing two front sights and front beads. I was shocked to discover my eye dominance had shifted from left to right…no wonder I was having trouble! Prescription shooting glasses have mostly fixed the problem so, no, I’m not switching from left to right, too much muscle memory and too many left-handed guns.

Injuries are impartial. Forty years ago, when lefty actions where scarce, I bought two of my first from a lefty in the local Safari Club who had lost his left eye and needed to switch sides. John Wootters, great gunwriter and friend, was right-handed all his life…until he lost sight in his right eye to detached retina. In his 60s, the transition to left-hand shooting wasn’t easy, but it can be done. Likewise, injuries to the strong-side hand, arm, or shoulder can force shooters to switch. 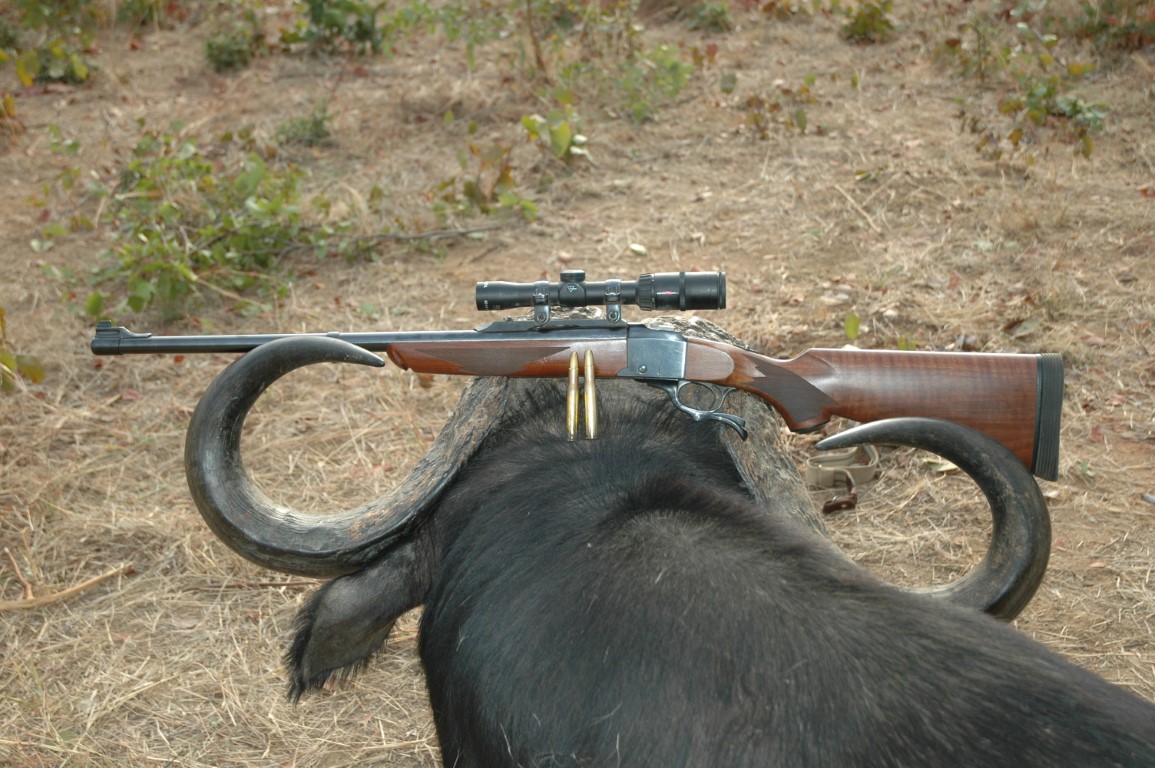 Ruger No. One buffalo: Cartridge selection is a problem with most left-hand rifles. The Ruger No. One has been chambered to more cartridges than any other factory rifle, and is totally ambidextrous. Left-handed Donna Boddington used a No. One in .450/.400-3” to take this awesome Zimbabwe buffalo.

A MATTER OF SAFETY

Most right-handers probably believe that left-handed guns are for convenience or speed. Suck it up, right? No. It’s really a matter of safety. It is a right-handed world, so most repeating actions are designed to eject to the right. And, in the case of a catastrophic failure, like a ruptured case head, the hot gases and shrapnel are directed to the right, away from the right-handed shooter’s face and eyes.

Now, put that right-hand-ejecting longarm on the left shoulder and experience the same catastrophe. Now the bad stuff is vented straight into the shooter’s face; serious injury is almost unavoidable.

Rock River LH AR: Boddington taking a field rest for prairie dogs with a mirror-image AR from Rock River. There are now several manufacturers offering left-hand ARs, far the safest and most pleasant-shooting for lefties.

Many firearms are more or less ambidextrous in operation, including most lever-actions, pumps, and semiautos.  However, if ejection is to the right side, the same safety hazard exists. And, vice versa, it also exists in the rarer cases of right-handers shooting mirror-image left-hand firearms.

There are truly ambidextrous actions. All break-open actions, most single-shots, and top-eject lever-actions are even-handed, and bottom-ejecting slide-actions and semiautos are totally ambidextrous. Placement of the mechanical safety can be awkward for lefties. Tang safeties work both ways, and most push-button safeties can be reversed, but this is convenience and training; the safety issue comes from being on the wrong side of the action if something goes badly wrong. 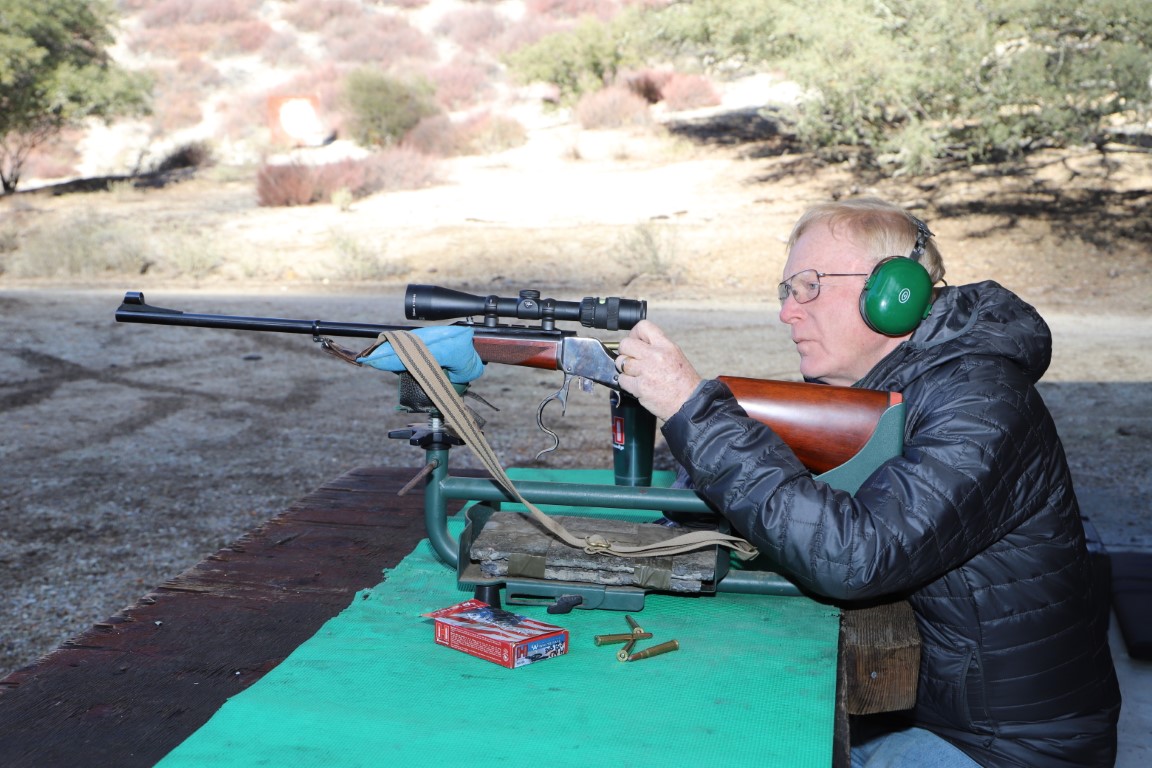 Whether falling block or break-open, almost all single-shots are very ambidextrous. This is Uberti’s Courteney stalking rifle in .303 British, on John Browning’s patent.

This is primarily an issue with long guns, because the shooter’s head is close to the action. Revolvers are ambidextrous, and virtually all semiauto pistols eject to the right. Neither are a concern because handguns are fired from arms’ length.

So, how real is the danger? Remote, but it only takes once.  I’ve seen five blowups in my life, mostly on ranges, people I didn’t know, thus from unknown causes. Four resulted in minor injuries…because they were right-handed and shooting right-handed guns. All would have been more serious if experienced by a lefty. The fifth was mine, a right-handed bolt-action, shot from the left shoulder. It was a .270 WSM, and there was a 7mm WSM cartridge in the box. Shouldn’t have chambered, but it did. And fired, swaging a .284-inch bullet down a .277-inch bore. The case head let go, and all the bad stuff came out the right side…like it’s supposed to. I was wearing shooting glasses, so minimal damage, burns and brass fragments on the right side of my nose and a red raccoon ring around my right lens. Absent eye protection, could have been bad!

Savage has long been a stalwart in offering left-hand options, especially in their M110 bolt-action line. This Colorado bull was taken with a Savage 110 in .30-06, one shot and done.

Look, I’m a gunwriter. Catastrophic failures are unusual, uncommon, unlikely. Of course, I shoot right-handed guns off my left shoulder. Good eye protection (and maybe a bit more caution in inspecting ammo) mitigates the risk, but it should not be altogether ignored. Wife Donna is also left-handed and (still) left-eye-dominant. Our personal guns are mirror-image left hand or ambidextrous. She doesn’t do this stuff for a living, so her exposure to right-hand long guns is minimal. The kids are all right-handed and have their own right-handed guns. They can also shoot my “almost ambidextrous” right-hand-eject guns, but they don’t shoot our mirror-image guns from the wrong side.

A friend was a dental surgeon, left-handed and commonly shooting right-hand bolt-actions (like so many lefties). Figuring his hands and right eye were worth a lot more than mine, I convinced him to switch to left-hand actions. I try to do the same with friends who have left-handed kids coming up, usually with success. Give it just a little of thought, and it makes sense: Why accept any unnecessary risk? 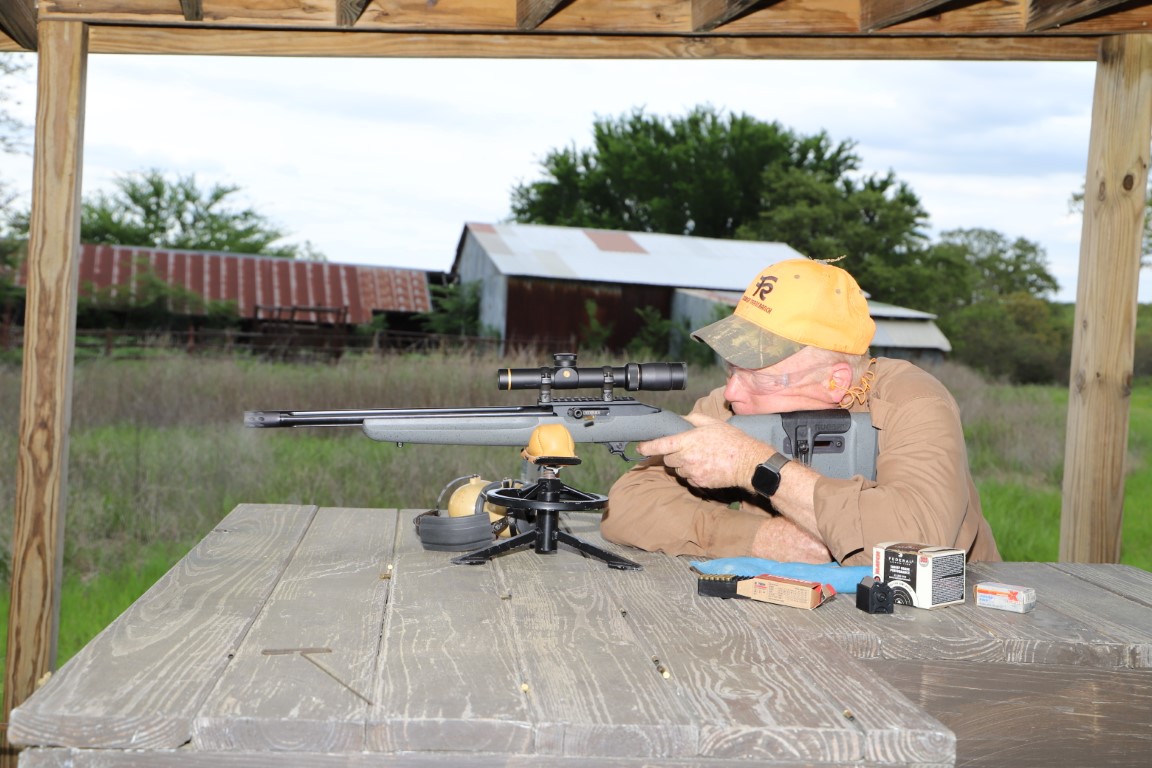 In recent years, Ruger has become a strong bastion for left-hand shooters. This left-hand 10/22 is the first-ever mirror-image left-hand semiauto .22.

I don’t actually whine about availability of true, safe-as-can-be left-hand guns, because there are so many more than ever before. In the old days, it was common to switch bolt handles and reverse rotation on bolt-actions. This simplified and speeded operation, but did nothing about the safety issue. Today we have mirror-image bolt-actions from Browning, CZ, Ruger, Savage, Weatherby, and more. John Browning’s bottom-eject slide-action shotgun has been around for a century, variously manufactured by Browning, Ithaca, and Remington. Benelli, Franchi, and Winchester offer mirror-image semiauto shotguns. Ruger now has a mirror-image left-hand 10/22, and Browning still offers the bottom-eject SA22, another John Browning design. There are break-open and falling-block single-shots, and plenty of break open doubles (over-under and side-by-side). Heck, there are even several options for mirror-image ARs. Truly ambidextrous lever-actions are scarce, as are classic control-round-feed bolt-actions, certainly on an affordable basis, but the selection is there.

So far, none of our grand-kids have turned up left-handed, and we haven’t identified cross-eye dominance. Odds are, we’ll have to cross one of those bridges. If we do, and they show interest in shooting, this is the selection of safe and sensible firearms for them. It’s not all that bad!