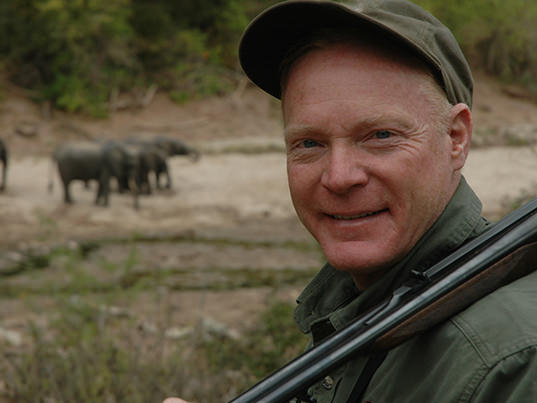 Craig Boddington was born in Kansas in 1952. As a teenager, when not involved with hunting and shooting, he spent a lot of time pursuing Boy Scout activities. At 17 years of age he became the youngest person to become Activities Director at his regional Boy Scout camp. Boddington attended the University of Kansas on an NROTC scholarship, graduating with an English degree and a regular commission in the United States Marine Corps. He retired from the USMC Reserves in 2005 with the rank of colonel after service in the Gulf War in 1991 and the Persian Gulf in 2002-2003.

Craig joined Petersen Publishing Company in 1979, initially as Associate Editor for Guns & Ammo magazine. Over the next few years he served as Editor of Guns & Ammo Specialty Publications and Associate Editor of Petersen’s HUNTING, and from 1983 to 1994 was Editor of Petersen’s HUNTING magazine. In 1996 Petersen Publishing was amalgamated with Primedia, and subsequently InterMedia Outdoors. Craig’s current position with InterMedia is Executive Field Editor for InterMedia Outdoor Group, including Guns & Ammo, Petersen’s HUNTING, and Petersen’s RifleShooter magazines, and co-host of Guns & Ammo TV and Petersen’s Hunting Adventures TV. Together with his daughter, Brittany, he hosts The Boddington Experience TV series on The Sportsman Channel. Craig has published more than 4000 magazine articles; authored 25 books on hunting, shooting, and conservation; and has appeared in more than 500 television episodes. His work has been published in Australia, Canada, England, Germany, Japan, Russia, Scotland, and South Africa as well as the United States. This year Craig published a new book, Buffalo II!, a revamping of his original work, Buffalo!.  Buffalo are Craig's favorite animal, and Africa his favorite place.

The first book was written in 2006, and while that was only 13 years ago, Africa and the buffalo herds have both changed drastically.  Buffalo II! is available for purchase from the publisher (Safari Press, www.safaripress.com) or by navigating to our online store using the top menu.

“I am a journalist. As such, throughout my career I have studiously avoided personal sponsorships within the categories I write about, which are primarily firearms, ammunition, optics, and hunting and shooting. My position is that It would be impossible for me to be paid to use products from “Remchester” and write honestly about “Swaropold”…and I never have. That said, it is obvious that the magazines I write for have advertisers, and the various television and other film productions I’ve been involved in have “sponsors”. This support is always greatly appreciated! As matters of both courtesy and sound business, products manufactured by print advertisers are likely to be written about; and sponsors’ products will almost certainly be used and discussed on camera. This is, without question, a fine line to walk…but not exactly the same as taking money to use a product. I am aware that this position is increasingly unusual. However, it has allowed me to write honestly, and to enjoy my many friends in this great industry…most of whom, at one time or another, have been print advertisers and television sponsors…or both…and may be in the future. Most importantly: After forty-plus years as an outdoor journalist, I have no problem facing my reflection in the mirror.” CRAIG BODDINGTON

Thank you! Your submission has been received!
Oops! Something went wrong while submitting the form.